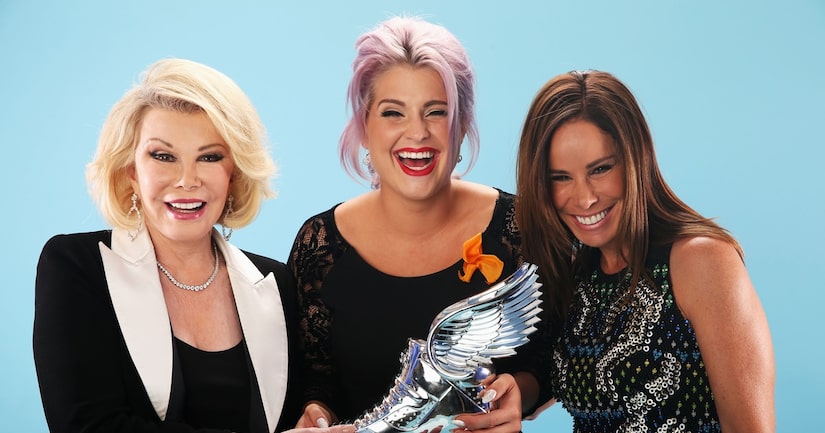 “Extra” caught up with “Fashion Police” stars Joan and Melissa River’s at the Do Something Awards on Wednesday, where they presented their co-star, Kelly Osbourne, with an award for her work in raising awareness of multiple sclerosis. Her brother, Jack Osbourne, was diagnosed with the disease in 2012.

The mother-daughter team talked about what an honor it was to be there for Osbourne. Joan said, “We have one of the few shows that we really like each other on.” Melissa added, “Everyone really, really likes each other and enjoys coming to work, so of course we would show up.”

Joan said that Kelly is a great example of someone who turned her life around. “She’s a hard worker. She expects nothing from anybody.”

The elder Rivers also weighed in on some of today’s hot topics, including her opinion on Lindsay Lohan’s post rehab look and the sexting scandal surrounding NYC mayoral candidate Anthony Weiner.

She gave LiLo kudos after seeing pictures of the actress leaving rehab on Tuesday. “I thought she looked great. There are no roots, the figure was good, and she was toned. Good for her, I hope she makes it.”

As for Weiner, Joan, who lives in New York, said she would never vote for him. “He’s a pig and disgusting and should be taken off the ballot. He’s an embarrassment to all of us. If you can’t zip it up, you cannot rule and run NYC.”

Watch more of our interviews at the Do Something Awards and click here for a complete list of honorees!