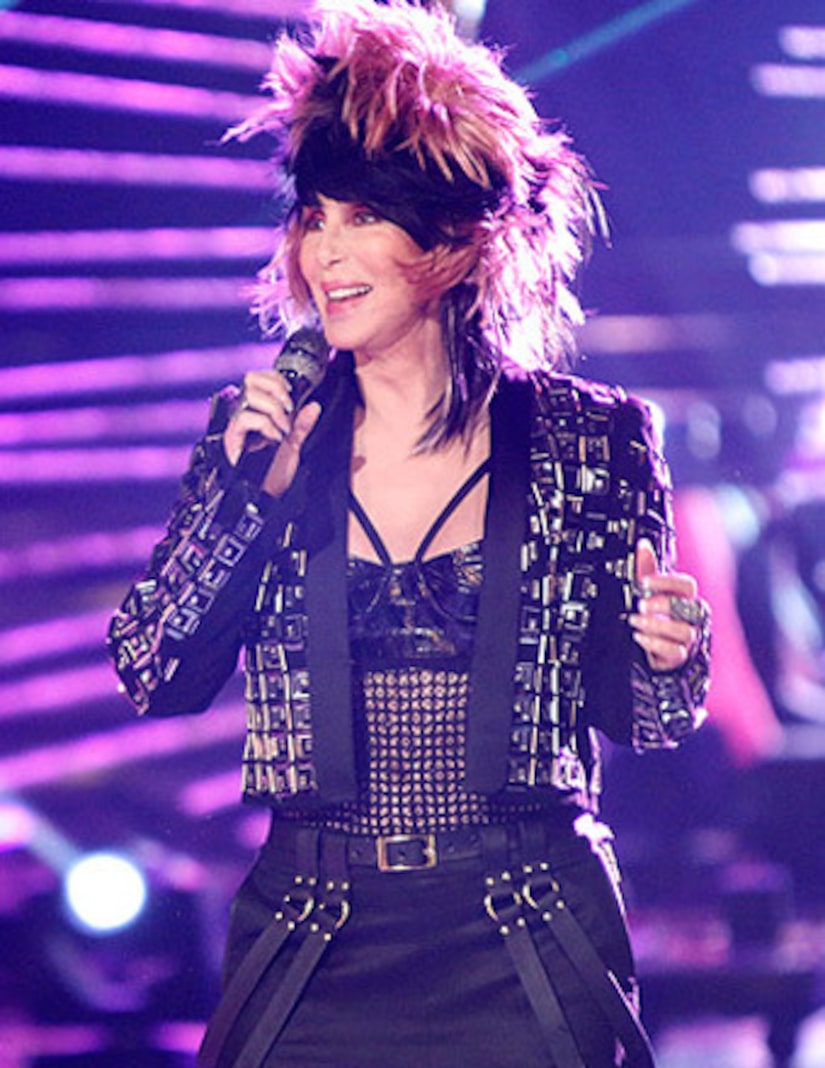 It was a “Woman’s World” on “The Voice” stage Tuesday night as Cher, Christina Aguilera and Danielle Bradbery stole the show. If only the “Burlesque” co-stars could have done a duet featuring the newly crowned “Voice” winner!

Cher is known for her racy and dramatic costumes, and at 67, she didn’t disappoint. Sporting a messy pink-highlighted fauxhawk, and a sexy all-black ensemble, she rocked the stage. In Cher’s words, the look was “luxe punk.”

The star, who will release her new album "Closer to the Truth" on September 24, admitted she had a great time performing, even though she has been under the weather.

“I was in Dagestan a little while ago and I kind of got sick there and it hasn't been the same, and so that's why I was kind of hesitant, but you know it wasn't great, but it wasn't horrible.” Performing, even for a veteran like Cher, apparently never gets easier. “It just was a little bit nerve-wracking… my last concert I ever do, I'll probably be nervous before I go on.”

The iconic singer also reminisced about her early days in showbiz. “When Sonny and I started, we played bowling alleys and roller rinks,” she said, admitting she definitely would have auditioned for “The Voice” when she was a teen, telling “Extra,” “Heck yeah!” These days she would even consider joining "The Voice" as a mentor, but only for a week. "That might be really fun," she said.

For Blake Shelton, meeting Cher brought back memories of his dad. “My dad’s favorite artist on earth, bar none, was Cher. My dad worshipped Cher… I wish he could have seen tonight’s episode… I would have been giving him crap about it!”

Host Carson Daly was equally floored by seeing the Grammy winner perform. “It was so crazy to see Cher on the stage,” he said. “I’ve been very lucky to watch Madonna, Paul McCartney, Michael Jackson. I’ve interviewed them, I’ve talked to some of the greats, but watching Cher tonight, that sort of completes my personal volume of icons in music.”

Christina kicked off the finale – showing off her bare midriff – dueting with Pitbull for their hit song “Feel This Moment.” Carson gave the returning "Voice" coach props, saying, “She looked great, she never misses a beat.”

The real winner, of course, is 16-year-old Danielle Bradbery, who walked away with the coveted “Voice” trophy.

Her coach, Blake, explained, “I couldn’t be happier… Danielle Bradbery might be the most important artist to walk across ‘The Voice’ stage…[she] might be the first person we’ve actually discovered on this show.”

After her big win, Danielle, looking like a beauty queen in a sparkly white gown, admitted she had a hard time singing “Born to Fly” at the close of the show. “I had kind of an idea, but I did not know I was going to have to sing this whole song after crying my eyes out and shaking, but I tried my best to sing.”