It’s a baby boy for singer Tamar Braxton and record executive Vincent Herbert! The happy couple welcomed the little guy on Thursday, tweeting, “He’s here!” along with a picture of gifts from well wishers like blue teddy bears, balloons and sunflowers.

“The Braxton Family Values” star announced her pregnancy on “Good Morning America” on March 13. She later told Us Weekly, "I have a lot of energy. I'm always upbeat and everyone has to tell me to sit down somewhere," she laughed. "But I feel amazing!" 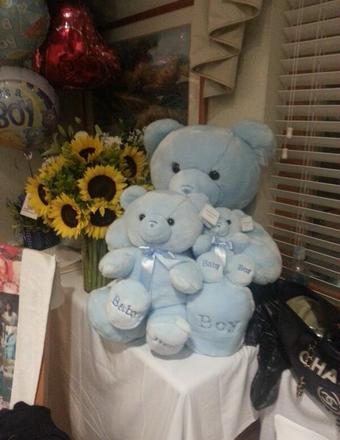 She added that her famous family had plenty of advice for the first time mom, including, "I think the one that sticks out the most is be the best mom you can be and always focus on your family first," Braxton recalled.

Tamar is a former member of the The Braxtons music group and sister to Grammy winner Toni Braxton.

The new mom and dad star in their own “Braxton Family Values” spinoff, “Tamar & Vince” on WE, and she will star in a summer talk show, “The Real.”