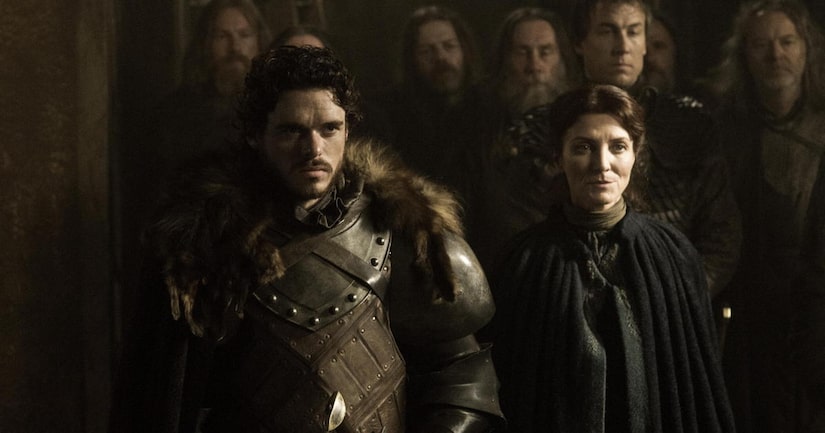 Sunday's episode of “Game of Thrones” packed a wallop of an ending… and left fans wondering what's in store for the surviving denizens of Westeros when the Season 3 finale airs next Sunday.

The episode, titled “The Rains of Castamere” and aptly nicknamed “Red Wedding,” saw the continuing saga of our favorite Throners, but ended in a bloodlust in which several key Stark players were killed rather gruesomely.

To the point, Robb Stark (Richard Madden), mother Catelyn Stark (Michelle Fairley), pregnant wife Talisa (Oona Chaplin) and most of Stark's army were trapped and viciously murdered by the family's evil nemesis, the Lannisters, while attending a seemingly joyous wedding. Even Robb's dire wolf was axed, or arrowed, through the heart.

'Game of Thrones': The Biggest Shockers We Can't Stop Talking About

For those who have read the books by George R.R. Martin, this was a highly anticipated twist, but for viewers experiencing the brilliance of “Game” for the first time, it was jaw-dropping.

How will the turn of events affect the end of the season? Here are a few burning questions:

--With only a few Starks left, could the family be on the brink of extinction or could they become even more powerful? Young Bran (Isaac Hempstead Wright) is quickly honing his abilities at a master warger, throwing his mind into others to make them do what he wants. Could he be the one to rule them all?

--Will Bran have some strong warriors by his side? His half-brother Jon Snow is proving to be resilient, escaping from the Wildlings, while sister Ayra (Maisie Williams), who always seems to be in the wrong place at the wrong time, manages to survive.

--How will this Stark slaughter news go over at King's Landing? Sure, Papa Lannister (Charles Dance) will be pleased with the results, as will his malicious daughter Cersei (Lena Hedley) and psycho grandson, King Joffrey (Jack Gleeson). But what will imp Tyrion Lannister (Peter Dinklage) think, now that he is married to Sansa Stark (Sophie Turner)… and will Sansa want revenge, especially if she is reunited with her younger, kick-ass sister Ayra?

--As for the other Westeros gang, the Starks are currently of no consequence… or are they? Daenerys (Emilia Clarke) continues to be major force, forming her army of devoted free slaves and wielding her dragons when she needs them, but could Bran be the one to tame those beasts? Stannis Baratheon (Stephen Dillane) will certainly not mourn Robb Stark's murder, one less person vying for the throne; Theon Greyjoy (Alfie Allen) is being tortured, so he won't care too much about his former benefactors; and what about those walking dead White Walkers?

Winter is still coming, after all…