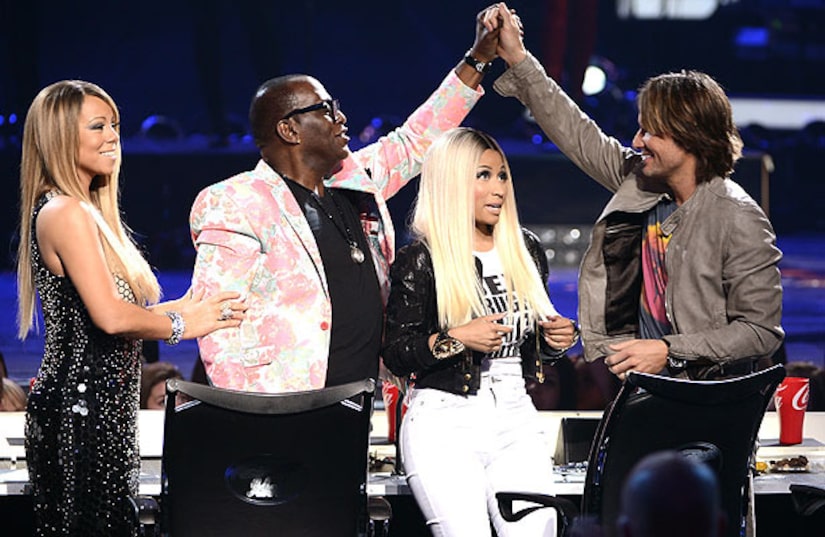 Three judges down… one to go? With yesterday's announcements that Mariah Carey and Nicki Minaj are officially not returning to “American Idol” next season, and Randy Jackson's previously announced exodus, where does that leave remaining judge Keith Urban?

The country superstar appears to be hanging tight to see what happens. Urban recently told AP, "I have no official information of anything. I'm pretty much in the same boat as everybody else here with the rumors that have been floating around. I don't know anything more about what's happening next season."

Urban continued, "It was like this before I signed on... so it's not unusual for the 'Idol' folks to be in this place of figuring out what they want to do, then they always pull it together."

Mariah's PR firm tweeted her departure and explained in a statement: "The rest of this year is jam packed with Mariah putting the finishing touches on her much anticipated forthcoming album, headlining the Macy's 4th of July Fireworks Spectacular and appearing in Lee Daniel's 'The Butler,' opening in August... Riding high on the massive success of her unprecedented multiplatform her new single "#beautiful" (featuring Miguel), she is embarking on a much anticipated world tour that kicks off this October in Asia."

Minaj made her own confirmation via Twitter hours after the Mariah's announcement, tweeting, “Thank you American Idol for a life changing experience! Wouldn't trade it for the world!... Time to focus on the Music!!! Mmmuuuaahhh!!!”

One thing is for certain… host Ryan Seacrest will be back. He told “Extra,” “I'm staying next season, yes. I'm hosting 100%.”