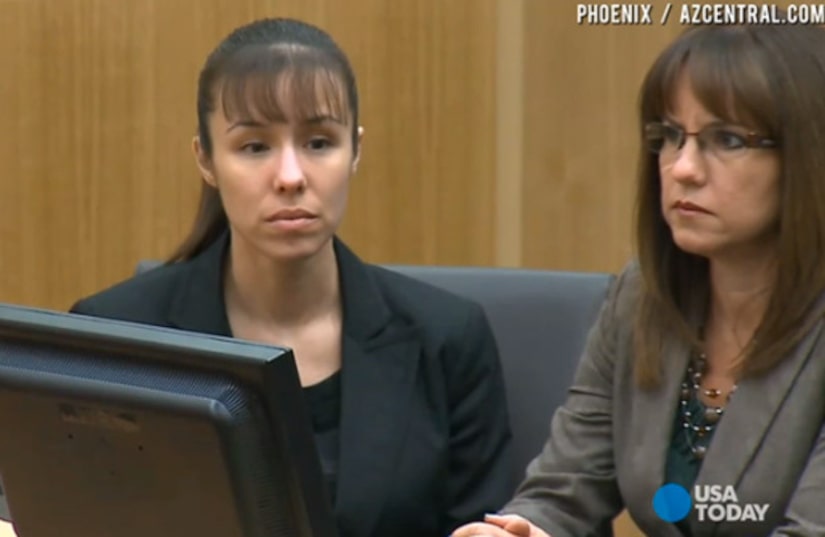 Convicted murderer Jodi Arias has narrowly escaped the death penalty… for now. After months of murder trial testimony, Jodi's jurors couldn't agree between a sentence of life in prison and the death penalty, resulting in a hung jury.

Following three days of deliberations, the panel deadlocked 8 to 4 in favor of the death penalty. CBS station KPHO tweeted that some jurors were in tears as they left the courtroom late Thursday, with one juror mouthing the words, “I'm so sorry.”

Victim Travis Alexander's family reportedly "very upset" when they heard that the jury could not reach a decision.

Judge Sherry Stephens scheduled a retrial to begin on July 18. A new jury will be selected for the sentencing phase only. If the second panel results in a hung jury, then execution will be taken off the table and the judge will be left to decide between life and natural life in prison, however, the prosecutor can decide not to pursue the death penalty, in which case the judge would sentence Arias to one of the life sentences, ending the trial.

In other Jodi news, Phoenix's Channel 12 reporter Oralia Ortega shared some of Jodi's bizarre demands during her “save my life” media blitz.

Ortega explained that Arias did not want her shackles or prison garb in the shot, hiding her stripes with a white sweater. She also asked to not be filmed while she put on makeup and fixed her hair.

The reporter added, “She even told 12 News we had to bring foundation and waterproof mascara.” When the camera captured her fixing her hair, she asked, "Are you filming me?" Watch the report below!

On May 8, Jodi was convicted of murdering ex boyfriend Travis Alexander in June 2008. She admitted to stabbing him 27 times and shooting him in the face, but claimed it was done in self-defense.