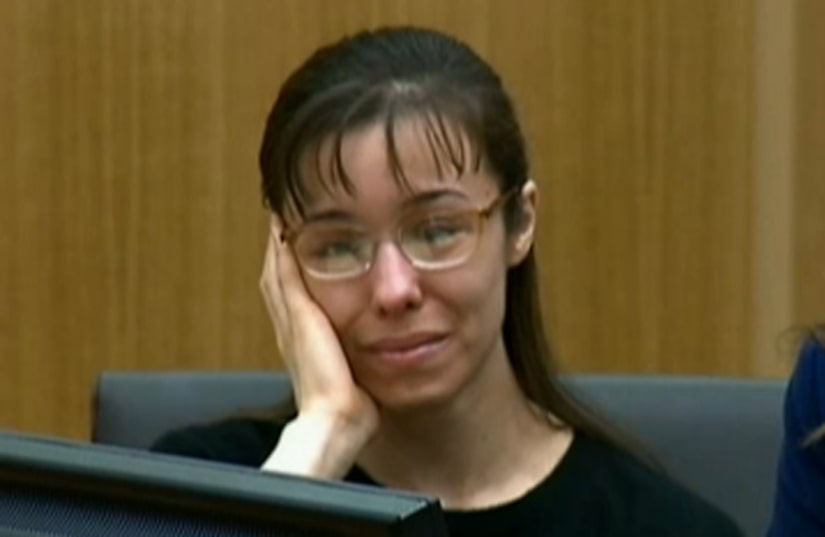 Convicted murderer Jodi Arias took the stand on Tuesday and asked the jury to spare her life, as the nation watched via live streaming video. These final days of deliberation are life or death for the 32-year-old as the jury decides her fate.

Jodi remained calm and composed as she addressed the jury for the last time in the marathon Arizona trial. In a plea for her life, she explained that she had often thought about committing suicide and "unburdening" her family, but had ultimately changed her mind.

Before sharing her life story and artwork via a slideshow, she explained why she was worth saving, noting previous contributions of her hair to the charity Locks of Love, her desire to sell "Survivor" t-shirts to help victims of domestic violence, and her plan to start prison recycling and reading programs.

She told the panel that she never wanted to drag victim Travis Alexander's name through the mud. "It was a goal of mine to preserve his reputation," she said, adding, “I loved Travis and I looked up to him. At one point he was the world to me.”

Arias continued, saying that killing Alexander was "the worst thing I've ever done… before that day I wouldn't even want to harm a spider… to this day I can't believe I was capable of that kind of violence... I'm horrified by what I've done.” She noted that she saved spiders from execution by taking them outside.

She closed by explaining that she "lacked perspective" when she told the press that she wanted the death penalty. Referring to her family and Travis' family, Jodi said, "I want everyone's healing to begin and everyone's pain to stop."

The jury must now decide between between life in prison or the death penalty.

Jodi and two friends were expected to speak on her behalf on Monday, but the hearing took a turn when her attorney, Kirk Nurmi, told the court that her friends weren't coming.

Nurmi explained that at least one friend, Patricia Womack, had reported "intimidation" as the cause. He then asked for a mistrial and to withdraw from the case, but his requests were denied. When he later asked the judge to stay the trial, he was again denied.

On May 8, Jodi was convicted of murdering ex boyfriend Travis Alexander in June 2008. She admitted to stabbing him 27 times and shooting him in the face, but claimed it was done in self-defense.

After the verdict, Arias spoke with FOX affiliate KSAZ and said she would "prefer to die sooner than later" and that "death is the ultimate freedom." She was temporarily placed on suicide watch.