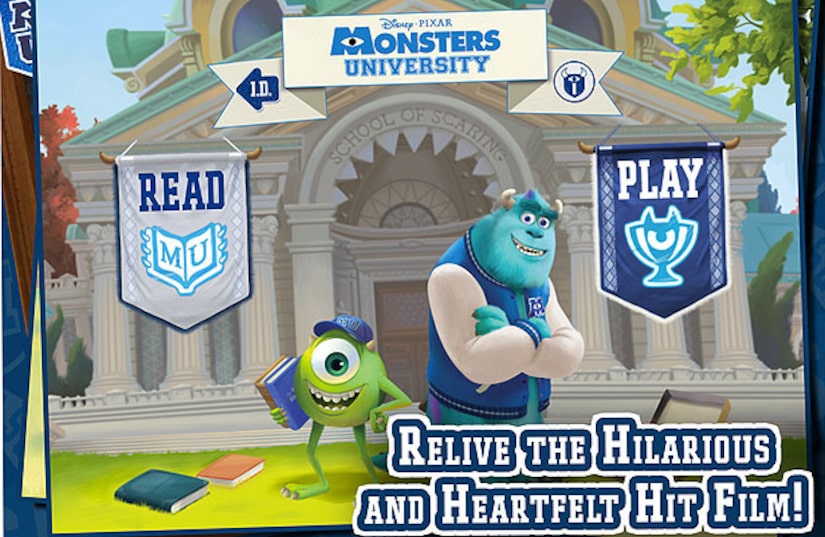 In anticipation of this summer's release of “Monsters University,” a prequel to “Monsters, Inc.,” Disney Publishing is releasing a brand new app, the Monsters University Storybook Deluxe! It shows how pals Mike Wazowski and James P. “Sulley" Sullivan became friends in monster college.

Mike and Sulley weren't always inseparable. From the moment these two mismatched monsters met, they couldn't stand each other. The new storybook app unlocks the door to how Mike and Sully overcame their differences and became the best of friends.

Mann explained about the app, “It's a companion piece to the Monsters, Inc. app but different. You can expect the same storytelling and interactivity but there's even more video interaction. It gears more towards the college end, so you can create your own MU badge and play games along the way. We've also been able to add more animation to this app.”

Mann, who comes from a varied background in production and animation, started at Pixar in 2009 and has been working on “Monsters University” from the start.

“It's always been a dream,” said Mann. “It's so great working with these guys. I never take a day for granted. I get to work with Pete Doctor and John Lassiter. It's really amazing to be able to soak up all of their knowledge. Our studio really feels like a campus, like I'm back at school. Everyone is so passionate about what they do and love making movies.”

Mann was also excited to work with the “Monsters, Inc.” original cast. “John Goodman is back, Billy Crystal, Steve Buscemi returning as Randall. It's great having them back, and they really enjoy it, too. We usually have to record separately, but whenever we got the chance, we had John and Billy record together. You can just tell they just love being these characters and being these characters together.”

Does Mann feel pressure to get it right with the prequel? “People love the original film. I want to deliver on that promise because the characters don't really belong to Pixar but to the people who experienced the original film, so need to treat that faithfully and not let people down. I also don't want to let Pete Doctor down, the original director. But you can't think about that day by day, just try to make the best decisions possible at the moment.”

On the future of animated movies, Mann said, “My hope is that people won't see these films as just animated films. That there are movies that also happened to be animated. I'd like to see more and more animated films being nominated for Best Picture.”

The fully animated interactive Monsters University Storybook Deluxe! is available for $6.99 in the iTunes App Store for the iPad, iPhone, iPod Touch and iPad Mini. Click here to see more and to download!