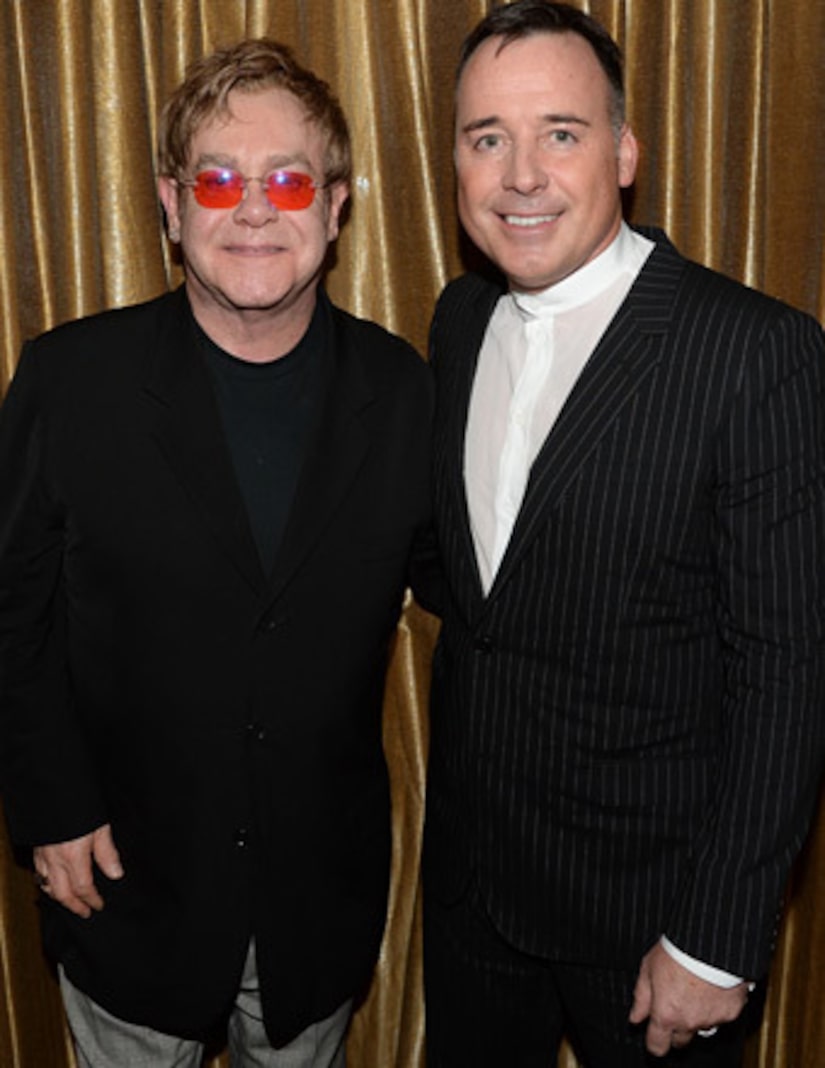 “Extra’s” Terri Seymour sat down with Sir Elton John and David Furnish for a rare interview all about life with children Zachary, 2, and Elijah, 3 months.

Elton and David spilled the beans on baby Elijah’s godmother. It turns out Lady Gaga will be looking out for both little ones.

“She’s a great role model,” Elton said. “She’s been a great godmother to Zachary. She came to bathe him in Las Vegas. She was already dressed to go to the show, and she was sitting there and she bathed him, and she was like dressed like Audrey Hepburn… and she fed him… We're all bonkers in this business, but we're human beings at the same time.”

The couple’s baby joy is in large part thanks to the American Fertility Association, which recently honored the pair. “Five years ago we never thought we'd have a family… This organization has enabled us to have two children who we absolutely adore, and are the best things that have ever happened to us!”

The “Rocketman” gushed about how both boys have changed their lives forever. “I love getting up in the morning and having breakfast with Zachary. They’re very portable; it's lovely to take them around the world.”

He added, “The biggest change for me, everything I thought I would find annoying about having children, like screaming and shouting, and tantrums… I don't find any of it annoying, I find it all enchanting.” David added, “You learn so much about yourself and about life by seeing children.”

Elton went on to say that Zachary loves being a big brother, “He loves his younger brother… Zachary’s all boy, Elijah is very Zen.” Elton revealed he knows all about typical kid stuff. “Listen, I can tell you all about Bob the Builder, Thomas the Tank, because I sit down and watch it with him.”

As far as who is the best diaper changer… David wins, while Elton is good with baths. “A ritual I love is 6:30 ‘tubby time.’ I know every children's book back to front… even in Las Vegas, he has his bath backstage, now we have to bathe two of them backstage.” The couple tries to take the children wherever they travel, when they can’t they Skype with them.

Both Elton and David consider themselves strict, agreeing the kids are going to have to earn their own money. David, “It's important they grow up with a sense of values. Things in life come from hard work and dedication.” Elton, who is the godfather of two of the Beckham’s boys, said that David and Victoria are great parents. “They are the best behaved kids, they have great sense of values, they are not spoiled.”

Terri asked whether the couple was planning on a baby girl in the future. Elton replied, “If we wanted three we would love to have a girl, two is enough.”

Next up, Elton will perform at the Race to Erase MS benefit on May 3. Learn more about the annual fundraiser at EraseMS.org.