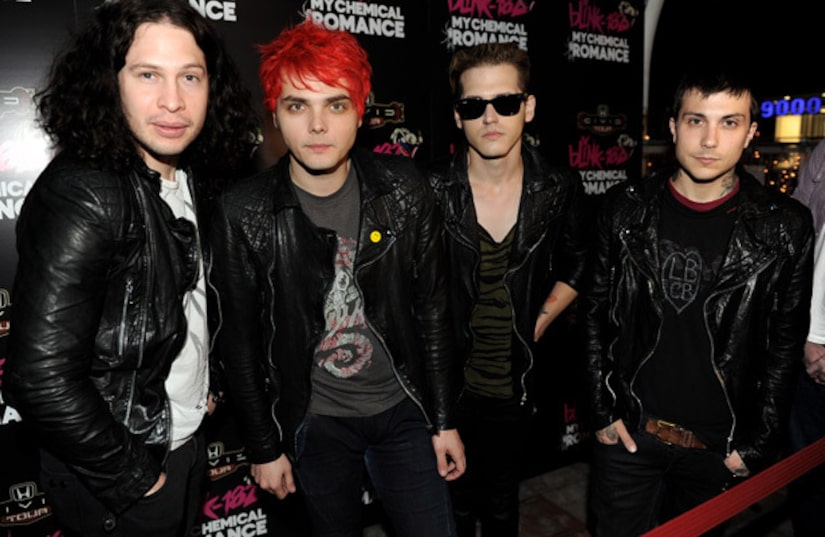 My Chemical Romance shocked fans on Friday when they announced the rock band was splitting up after more than a decade together.

The New Jersey group, comprised of members Gerard Way, Ray Toro, Mikey Way and Frank Iero, posted a statement on their website. "Being in this band for the past 12 years has been a true blessing. We've gotten to go places we never knew we would. We've been able to see and experience things we never imagined possible. We've shared the stage with people we admire, people we look up to, and best of all, our friends. And now, like all great things, it has come time for it to end. Thanks for all of your support, and for being part of the adventure."

Band leader Gerard Way followed up with a tweet. "Beyond any sadness, what I feel the most is pride," however, reality set in later and Gerard posted a touching message to fans on Sunday.

He wrote, "We were spectacular. Every show I knew this, every show I felt it with or without external confirmation. There were some clunkers, sometimes our secondhand gear broke, sometimes I had no voice -- we were still great. It is this belief that made us who we were, but also many other things, all of them vital. And all of the things that made us great were the very things that were going to end us."

"I want to thank every single fan. I have learned from you, maybe more than you think you've learned from me.” He closed with, "My Chemical Romance is done. But it can never die. It is alive in me, in the guys, and it is alive inside all of you. I always knew that, and I think you did too."

My Chemical Romance launched the band with "I Brought You My Bullets, You Brought Me Your Love" in 2002 and shot to fame with their first major studio record, "Three Cheers For Sweet Revenge," in 2004. They went on to release two platinum efforts, including the rock opera "The Black Parade" in 2006 and the post-apocalyptic themed "Danger Days: The True Lives of the Fabulous Killjoys" in 2010.