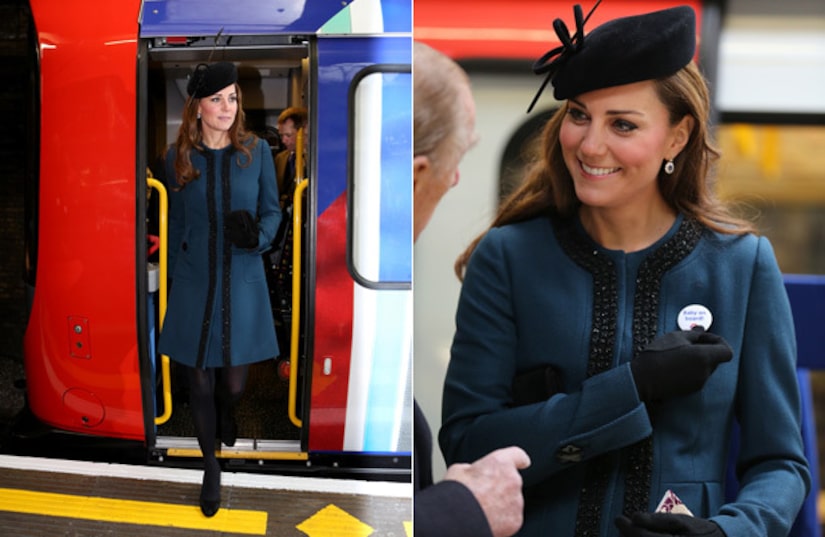 Kate Middleton, now five months pregnant, doesn't take the subway anymore, but she's prepared nonetheless, thanks to a "Baby on Board" button from the London Underground staff. According to Us Weekly, the Duchess of Cambridge accepted the pin in good humor and joked, “I'll make sure to wear it at home."

Howard Collins, Chief Operating Officer of the London Underground, presented the badge, telling the Daily Mail that the pins encourage gentlemen to offer up their seats to expectant mothers on the tube and "saves men the embarrassment of having to guess if a woman is pregnant.“

The buttons could come in handy for women like Kate, who showed just a hint of a baby bump in a blue Malene Birger coat as she appeared alongside Queen Elizabeth and Prince Phillip. The royals were on hand to celebrate the opening of the new Queen Elizabeth II train.

Middleton is no stranger to London's Tube, which turns 150 this year. She rode it regularly while working for the clothing store Jigsaw. "I used to travel on the tube on a regular basis," she said. “I miss travelling on the tube."

The Queen, who was hospitalized with gastroenteritis earlier this month, chose a Karl Ludwig tweed coat for the occasion.