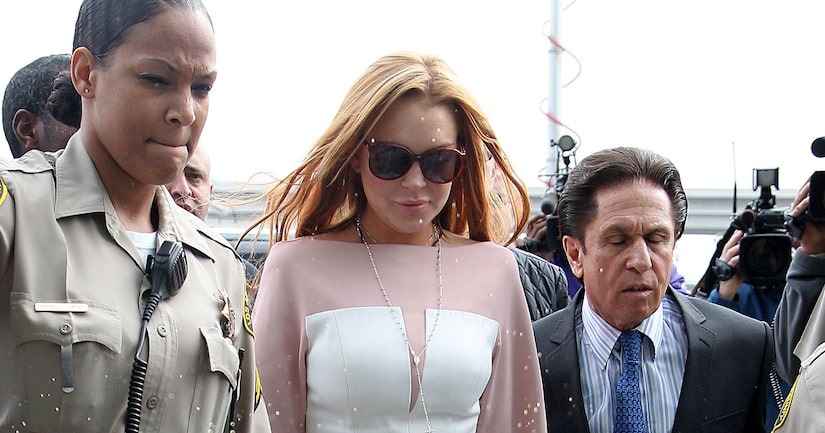 A very tired looking Lindsay Lohan arrived 48 minutes late to court today, where the starlet pled no contest to charges related to her infamous car crash in June. The "Canyons" actress, who narrowly escaped jail time, struck a plea deal that requires 90 days in a locked rehab facility.

The sentence also includes 24 months probation, 30 days of community service, 18 months of psychiatric counseling and monetary fines. The five days of jail time required in the reckless driving cases has been folded into the ordered rehab. She has a 180-day stayed sentence, providing she obeys all laws.

Leading up to the court appearance, it was an up-all-night amazing race to L.A. For Lindsay. She reportedly skipped her flight on Saturday, then exited a plane Sunday night just before takeoff. Lohan arrived to LAX via private jet, thanks to Mr. Pink's energy drink company, and rushed to the courthouse Monday morning almost an hour late.

Dressed all in white, LiLo was glitter-bombed as she made her way inside to meet with the judge.

In November 2012, the Santa Monica City Attorney charged the 26-year-old with three misdemeanors related to her June car accident on Pacific Coast Highway.

The crash took place on June 8, 2012 when LiLo's black Porsche hit a large dump truck. At the time, Lohan claimed a male friend was driving, while the other driver said it was Lindsay.

The three counts included giving false information to a peace officer, obstructing or resisting a police officer and reckless driving.