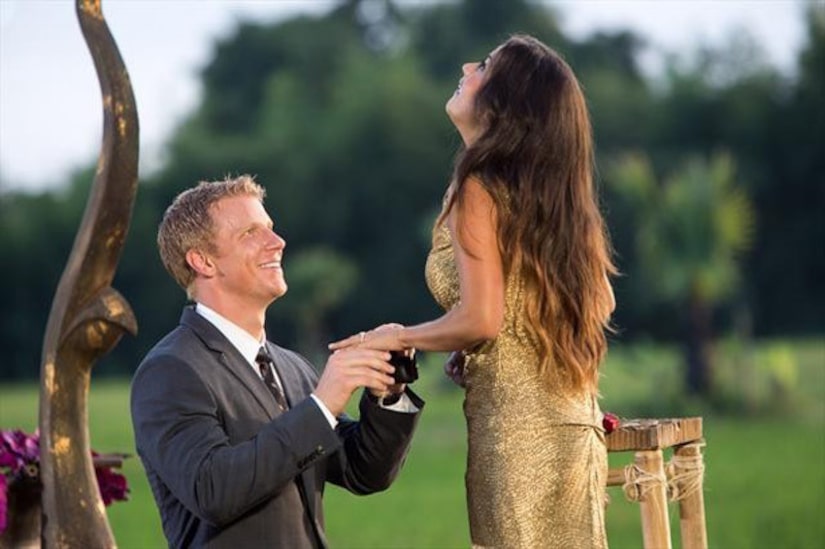 It was an emotional, three-hour roller coaster ride Monday night on “The Bachelor” finale as Sean Lowe made his final choice between Lindsay Yenter and Catherine Giudici.

In the end, the final rose and four-carat Neil Lane sparkler went to… Catherine!

The episode involved a series of family meetings, tearful heart-to-heart talks, a mysterious love letter and of course, the devastating breakup scene with Lindsay before Sean finally popped the question to his “funny and weird” bride-to-be. She said yes!

“Extra’s” A.J. Calloway caught up with Sean and Catherine the morning after the big finale and the pair seemed relieved to finally go public as a couple. “You want to gush, you want to tell everyone you are in love!” Catherine exclaimed.

Fans haven't seen the last of these lovebirds. Sean announced during the "After the Rose" special that the two plan to wed on TV!

"We don't have a date yet, but we have decided that we think it would be cool that since our relationship started and developed and was cultivated on a TV show, we'll have our wedding on a TV show," he said. "ABC will cover the wedding."

While their wedding plans were revealed last night, this morning Lowe confirmed that he is joining “Dancing with the Stars,” the perfect way to prepare for that first dance. “That’s why I signed up!” he told A.J.

Training with partner Peta Murgatroyd is already underway and he admitted, “My groin is so sore right now… all these dips and bends and spins and everything else. I’m sore man.”

Catherine added that Sean and Peta will make a great dance team and she’s not worried about the newly single Murgatroyd coupling up with her guy. “They are going to look great together, I have no worries.”