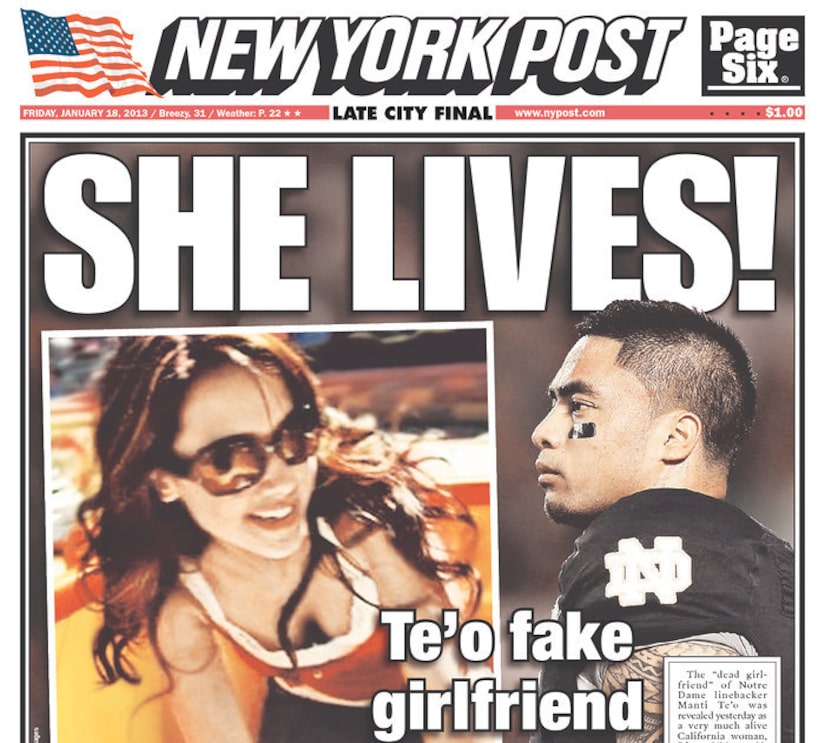 The real woman at the center of the Manti Te'o fake dead girlfriend hoax is very much alive… and her name is Diane O'Meara, a marketing executive living in California and the unwitting victim in the scenario. The NY Post identified her and displayed her image.

Unbeknownst to O'Meara, her Facebook photos were copied and passed off as the fictitious “Lennay Kekua,” who “wooed” Te'o, “died” of leukemia, and then made the linebacker sad enough to have an excellent season.

“Somebody stole her identity,” O'Meara's relative told the NY Post. “[O'Meara's family] found out about it yesterday. They were shocked,” said the family member, noting that Diane is “a good person” from “a very good family.”

Diane reportedly went to high school with Ronaiah Tuiasosopo, a friend of Manti and the supposed mastermind behind the elaborate “catfish” girlfriend ruse.

This might not be the only sob story Tuisasosopo has spun. UsWeekly reports the guy tried out for “The Voice” for the upcoming season and told the story about how his Christian rock band got into a terrible car accident, but how everyone survived. He wasn't chosen to compete.

Many reports speculate Te'o may have been in on the hoax, even though he released a statement saying he was a victim and that he's embarrassed.

MTV's “Catfish” creators have launched their own investigation. Nev Schulman and Max Joseph, who star in the MTV docu-series about Internet dating hoaxes, spoke to “Good Morning America” on Friday, and they believe the football player may have been duped.

Shulman, who was himself a victim on an Internet dating scam, said, "From what I gather, and from some contact that has been made with me with people who have been involved in this story directly, I get the impression that this is a much larger scheme than he would have thought. It doesn't seem to me that he is in on it, although, of course, that is yet to be seen. Even though it seems hard to believe because he is a high-profile football player, he is just as vulnerable and susceptible to being catfished as anyone else."