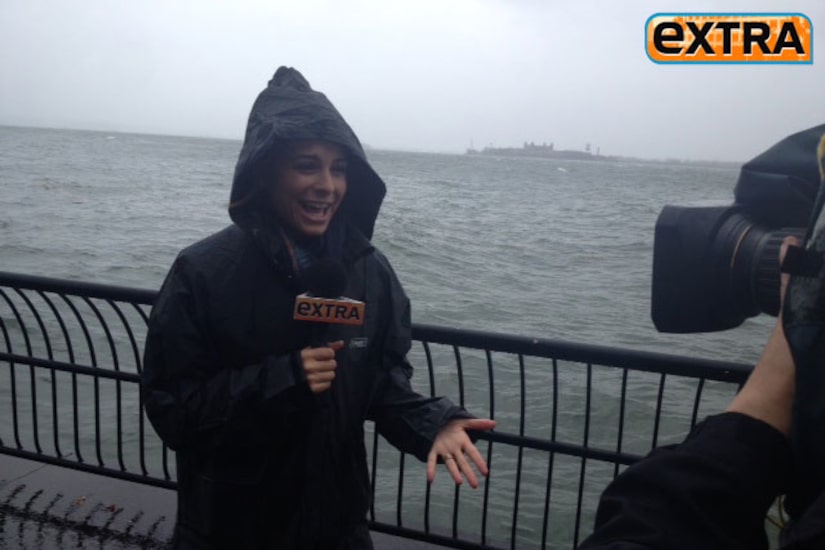 Here is Maria's timeline while in NYC, covering Superstorm Sandy:

Maria arrived to NYC: “As we arrived in New York, we took to Duane Reed to collect all the essential supplies for Sandy.”

8:00 AM: “We added to out final stock of supplies and packed our backpacks with everything we'd need in case we're stranded, which saved us later that night.”

9:30 AM: “The storm loomed early in the morning as we visit 'Live with Kelly and Michael,' one of few live shows in production that day.”

10:30 AM: “En route to the waterfront, I noticed the cranes throughout lower Manhattan. Later, I reported the crane collapse on 57th street.”

11:30 AM: “I spoke with The Weather Channel's Jim Cantore in Battery Park. He told us about the expected flooding through lower Manhattan as the ominous clouds collected above.”

1:30 PM: “At the harbor by Battery Park, waves crashed against the bank and rocked boats and buildings nearby.”

3:00 PM: “It didn't take long for me to want to go back into the storm, but my producer thinks the Weather Channel's heavy-weather satellite trucks might be better equipped than our… minivan.”

5:00 PM: “A quick stop at NYC's Irish Pub we met people stranded by plane cancellations, evacuees from local hotels and… plenty of people celebrating Sandy with a pint.”

6:00 PM: “Back at Battery Park, police pushed us up the block as major flooding begins and the water a few hundred feet from the river is ankle deep.”

6:30 PM: “From Battery Park I headed to Times Square, stopping as Midtown was flooded by hotel evacuees due to crane collapse.”

7:00 PM and into the night: “After so much time battered by the storm, a quick stop for a bite of a burger at The Standard Hotel left me and my crew stranded by the blackout in New York's lower West Side. Making our way through the West Village, the blackout and mass flooding felt like something out of a movie.”

“On our way out of the blackout, we ran into local residents Liv Tyler and Julianne Moore, who joined their neighbors in shock by the storm's damage.”

“Ignoring my mother's advice, I decided my crew and I would hitchhike with three kind strangers who drove us out of the blackout and into flooded streets… and they happen to be big “Extra” fans. Passing a fully flooded Ground Zero, I made my way to witness the storm's surge at the Brooklyn Battery Park tunnel.”

“On my way back to my hotel, I observed Sandy's astonishing damage on Manhattan homes. A long day comes to an end as we brace to stay warm and pray for the millions effected by this natural disaster."