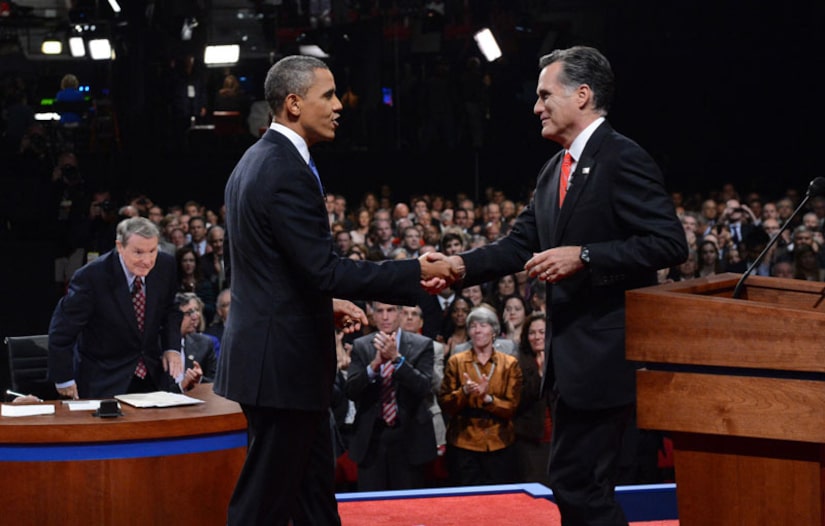 The President pulled at the audience's heartstrings right out of the gate when he said, "Twenty years ago, I became the luckiest man on earth because Michelle Obama agreed to marry me, and so I just want to wish [you], sweetie, a happy anniversary."

Romney hit the stage with particular spirit and spunk, challenging the President on hot topics like green energy and education funding. At one point he said, "You put your money where your heart is with $90 billion into green energy, money that would have hired 2 million teachers."

Other issues included healthcare and higher education. The blogosphere lit up when the President defended his Affordable Care Act and even admitted to becoming fond of the term Obamacare. Meanwhile, both politicians stood in favor of helping the nation's colleges and universities.

Romney explained, "I want kids getting federal funds for school. I want them to go to the school of their choice," while Obama responded, "We want to focus on making college affordable… we've provided millions more students assistance and kept rates low on student loans. That is an example where our priorities make a difference."

Who came out ahead? Big Bird! The Muppet favorite was thrown into the spotlight when Romney told the crowd, “I like PBS. I love Big Bird. I like you, too, but I'm not going to keep on spending money on things that we have to borrow money from China to pay for."

The comment instantly got the Internet buzzing about the PBS and the “Sesame Street” star, who made debate headlines, including the one here.