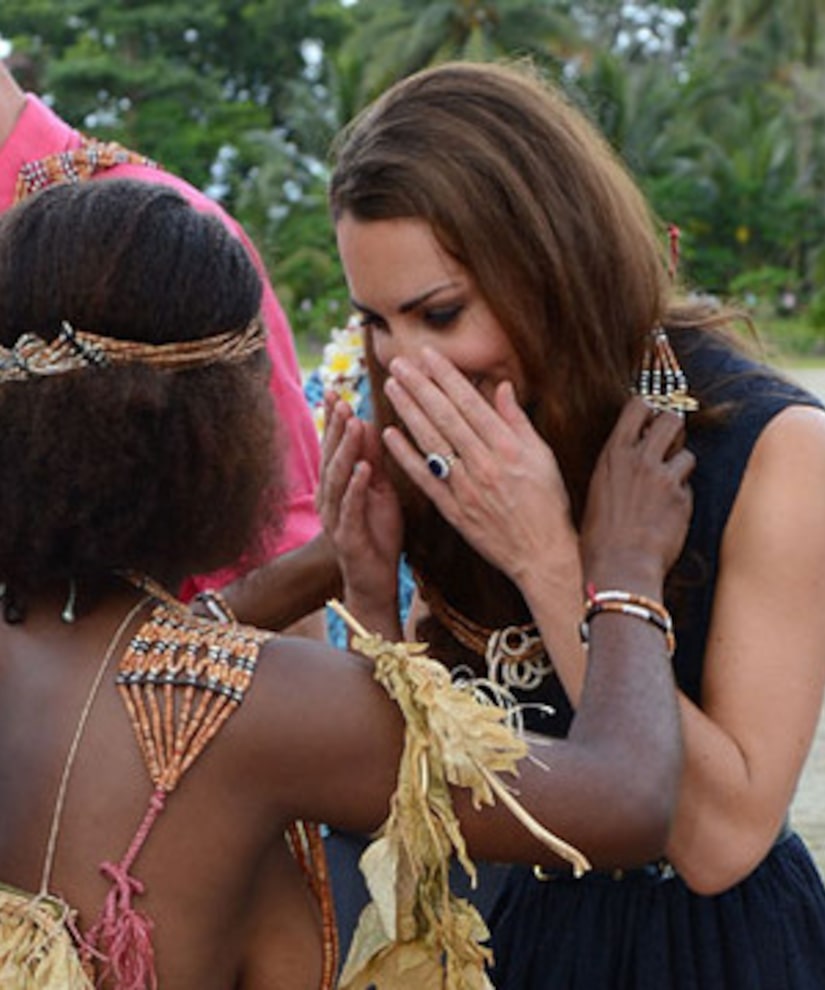 Photos of Kate Middleton arriving to the Solomon Islands and being greeted by a topless woman are priceless! The Duchess of Cambridge appeared to be having a giggle as the tribeswoman kindly placed a necklace on the future Queen.

While Kate and Prince William continue their Diamond Jubilee tour in the South Pacific, the royal family is going to battle over topless photos of the princess sunbathing in France, first published by the French magazine Closer.

The situation is quickly getting out of hand. The Irish Daily News published the same pics of the Duchess. One of the paper's owners, Richard Desmond, immediately issued a public apology and even threatened to shut down the publication, says the Daily Mail. On Monday, Italy's Chi magazine featured 200 images of Kate in a 26-page spread.

On Monday, a spokesperson for Clarence House told People, "We can confirm that a criminal complaint has been made to the French Prosecution Department today. The complaint concerns the taking of photographs of the Duke and Duchess of Cambridge whilst on holiday and the publication of those photographs in breach of their privacy."

The source added, "[Attorneys] will appear in court today in Paris seeking an injunction against Closer magazine using more pictures and to prevent further publication of the photographs in France. It will lead to a longer court case where damages will be sought."

The lawyers hope to have the magazines yanked from newsstands and the images removed from the website. They also want to ban any reprints or future sales of the photos.

Duchess Sarah Ferguson, who was photographed sunbathing in the South of France 20 years ago, offered her support to Kate via the Daily Mail.

"I have total empathy and sympathy for her,” she said. “I have been there and know what it's like. It is a devastating invasion of one's personal inner space. It is deplorable, abhorrent and despicable.”