President Barack Obama saw his bid for reelection take a big step forward as wife Michelle Obama had a star turn at the Democratic National Convention on Tuesday with a rousing speech.

Looking warm and graceful in a custom Tracy Reese dress and J.Crew pumps, Mrs. Obama spoke from the heart about her husband’s ability to maintain his ideals as a man and as a father, even with the demands of his position.

“When people ask me whether being in the White House has changed my husband,” Michelle Obama said, “I can honestly say that when it comes to his character, and his convictions, and his heart, Barack Obama is still the same man I fell in love with all those years ago.”


The first lady’s presentation wowed Hollywood and political pundits alike. Here are some of the Twitter reactions:

Anderson Cooper: “Never heard such a well delivered speech by a first lady ever."

Cher: “OMG! Just Watched Michelle Obama Speak & am Completely Overwhelmed! She Was Amazing! She is Truly a "FIRST LADY"! A Woman to Admire & Emulate!”

Bill Maher: “#MicheleObama - wow! After that speech, look out Hillary she may beat ya to the white house.”

President Obama enjoyed his wife’s presentation, watching it from Washington D.C. with daughters Malia, 14, and Sasha, 11, tweeting the below pic. 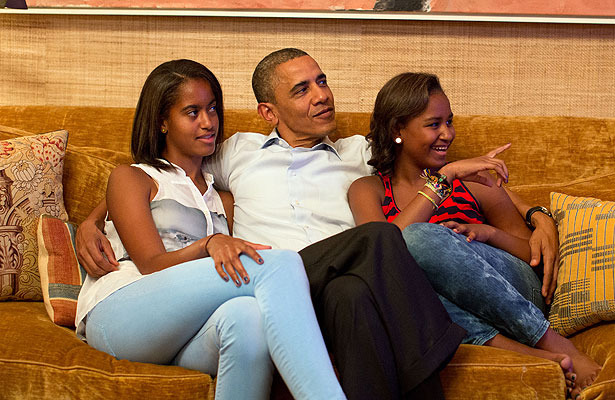 President Obama is scheduled to arrive to the convention on Thursday.