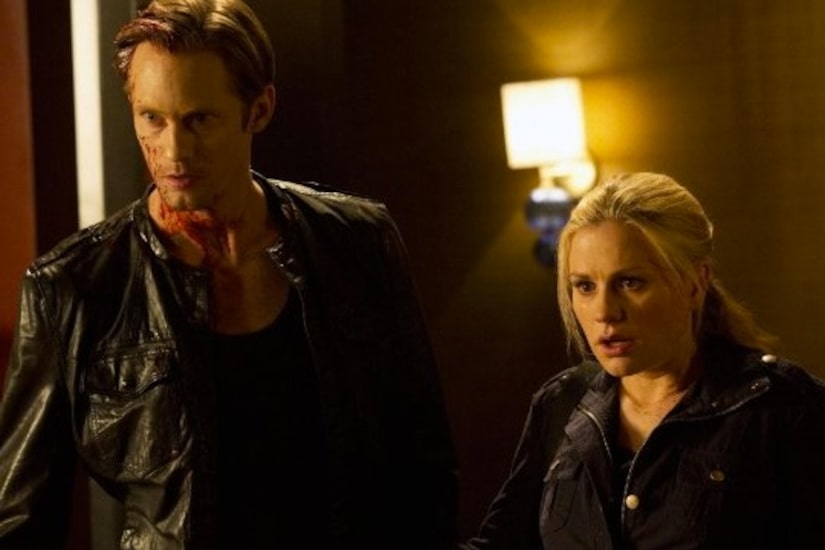 Join "Extra" as we host a live recap of the "True Blood" Season 5 finale on Monday, August 27 at 3PM ET/12PM PT via Spreecast. "True Blood" star Carrie Preston, aka sassy Merlotte's waitress Arlene Fowler, will join in the chat and give insight into what went down on Sunday's season closer…

Here's a short rundown of how things ended with our favorite characters:

Sookie: Just as evil, faerie-eating vampire Russell Edgington (Denis O'Hare) is about to kill Sookie and all her faerie friends, Eric shows up and stakes him. Good riddance. Eric then convinces Sookie she has to come back with him to the Vampire Authority headquarters to try and talk some sense into Bill (Stephen Moyer).

Jason: After getting knocked out by a faerie blast, Jason (Ryan Kwanten) wakes up and can see his dead parents, who are now definitely anti-bloodsucker. They start talking smack about all the “fangers,” and Jason starts to listen, deciding to become a militant opponent to all vampires, including his beloved Jessica (Deborah Ann Woll).

Sam and Luna: The two shape-shifting lovebirds have infiltrated the Vampire Authority to rescue Luna's (Janina Gavankar) young daughter, who was taken as a pet because the little girl is also a werewolf pup. Sam (Sam Trammell) comes up with idea that Luna shift into vampire Steve Newlin (Michael McMillian), so they can walk out there with the girl, but it doesn't go according to plan.

The Merlotte's folks: As the comic relief of the episode, Lafayette (Nelsan Ellis) and Arlene (Carrie Preston) watch as Holly (LaurenBowles) helps Andy's (Chris Bauer) faerie friend, who he inadvertently knocked up, give birth to four babies.

Pam and Tara: New vampire Tara (Rutina Wesley) joins Eric and Sookie in their rescue plan, and when she finds her maker, Pam (Kristin Bauer van Straten), the two engage in a passionate kiss. It's on. Jessica, who was also imprisoned with Pam, exclaims, “I KNEW it!”

Alcide: The hunky werewolf (Joe Manganiello) decides enough is enough and defeats the vampire-blood addicted pack leader to become the pack leader himself. It's about time.

And finally, Bill: The good, sweet, kind Bill has definitely gone bye-bye. He realizes Lilith -- the all powerful vampire God he's been worshipping the whole season -- has set up a competition to gain her ultimate power, and so offs the last remaining authority, Salome (Valentina Cervi), leaving him the true leader. Eric and Sookie find Bill and try their best to persuade him to return to his old life, but Bill won't hear of it. He drinks all of Lilith's Kool-Aid, dissolves into a puddle of blood and is reborn as a god. Oh boy.

Reminder: Join "Extra" for a live recap of the "True Blood" Season 5 finale on Monday, August 27 at 3PM ET/12PM PT via Spreecast.