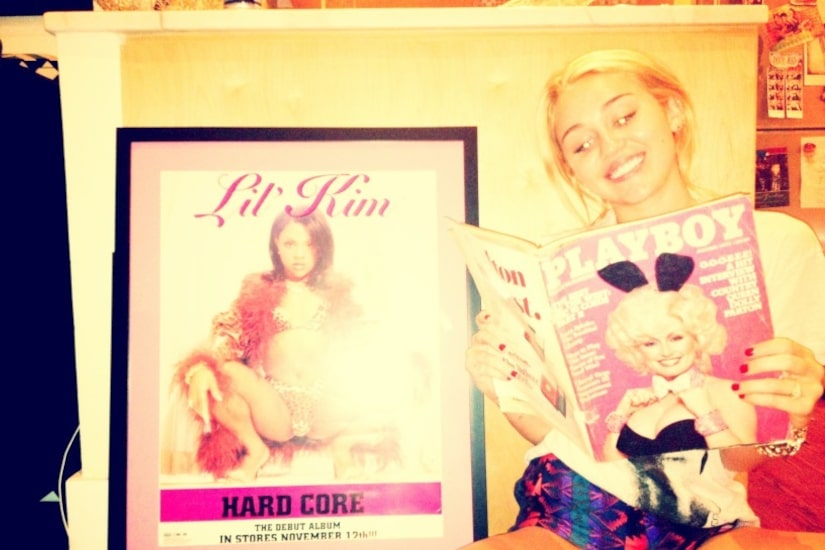 After posting a controversial picture Tuesday on Twitter, 19-year-old Miley Cyrus is being knocked by a prominent right wing group for promoting overtly sexual messages to young fans.

In the photo, the newly-engaged singer is seen sitting cross-legged in teeny colored shorts, perusing a vintage copy of Playboy with her godmother Dolly Parton on the cover. Next to her is the raunchy cover of Lil' Kim's debut album, "Hardcore."

Miley also posted the pic on Instagram with the caption, "Catching up on some light reading. #myfriendsarecoolerthanyours ps @Dolly_Parton you look sexy! still do!"

Dan Gainor of the Culture and Media Institute told Radar Online, "Miley Cyrus continues to be the very opposite of a role model to her young fans. She has gone from playing Hannah Montana to a real, like, self-confessed 'stoner' whose videos look like she's selling herself, not her music."

He continued, "Remember, this is the same Miley who went pole-dancing on the Teen Choice Awards when she was 16. Promoting Playboy at 19 is nothing new!"

On Tuesday night, Miley was seen dancing on the tables at the Electric Room in NYC.