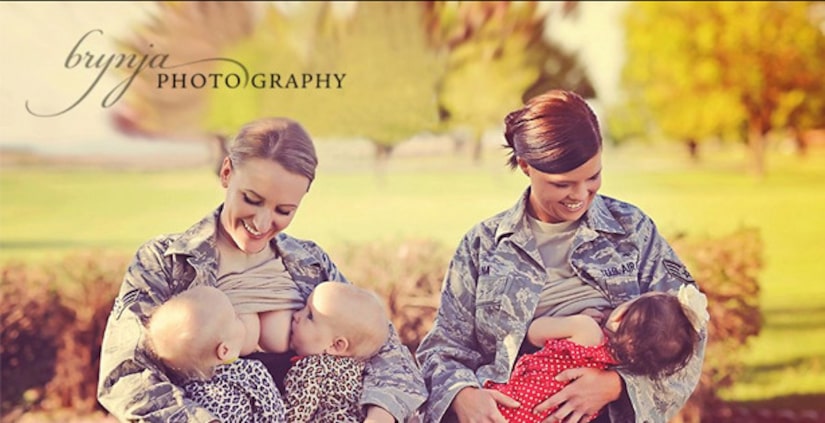 Military moms in Spokane, Wash., took the controversy over breast-feeding in public to a whole new level with a recent photo shoot.

Terran Echegoyen-McCabe and Christina Luna, members of the Air National Guard, posed for photographer Brynja Sigurdardottir at Fairchild Air Force Base as part of a poster campaign for National Breastfeeding Awareness Month. They never expected the professional photos to cause a stir.

"A lot of people are saying it's a disgrace to the uniform,” said Crystal Scott, who organized the shoot and runs the site Mom2Mom. “They're comparing it to urinating and defecating [while in uniform]. It's extremely upsetting. Defecating in public is illegal. Breast-feeding is not."

Air Force spokesperson Captain Rose Richeson told the "Today" show that they have no policy on the matter, adding, "Airmen should be mindful of their dress and appearance and present a professional image at all times while in uniform."

As for Echegoyen-McCabe, pictured with her twin girls, she's proud of the photos, "I have breast-fed in our lobby, in my car, in the park ... and I pump, usually in the locker room. I'm proud to be wearing a uniform while breast-feeding. I'm proud of the photo and I hope it encourages other women to know they can breast-feed whether they're active duty, guard or civilian."

Is breast-feeding in public a fundamental right or should it be kept in private? Vote now on our Facebook page!