The reviews for the highly anticipated "The Hunger Games" are mostly positive, with an 87% positive rating on Rotten Tomatoes. 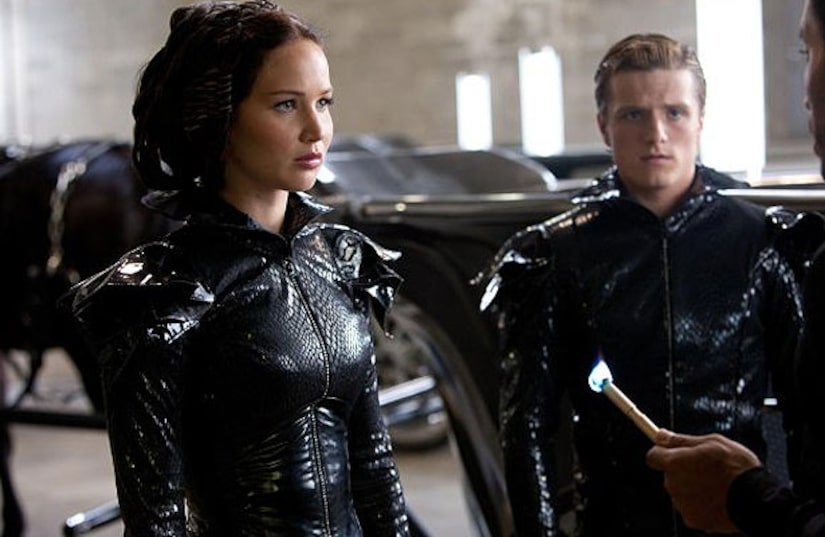 The New York Daily News' Joe Neumaier called the film "light years ahead of 'Twilight'." "It's better and scarier than its source book," he wrote, "And aims an angry eye at our bloodthirsty, watch-anything-and-cheer culture."

Alonso Duralde of The Wrap also picked up on the social commentary aspect of "The Hunger Games," comparing the film to the very reality shows it satirizes. "The movie dazzles you with its bravado and moves fast enough to keep you from asking too many questions about its implausibility," he said.

The big-screen adaptation of Suzanne Collins' futuristic novel about an annual event which pits children against one another in a battle to the death, stars Jennifer Lawrence, Josh Hutcherson and Liam Hemsworth.

Check out "Extra's" NYC premiere coverage and in L.A!

'The Hunger Games' Who's Who

Portrayed by: Jennifer LawrenceKatniss is a resourceful, strong-willed 16-year-old living in Panem's District 12. She volunteers herself for the 74th Annual Hunger Games in place of her younger sister, Primrose.Her father died in a mining accident when she was 11, and she has since been the sole provider for her sister and mother. Katniss spends most of her time hunting illegally outside the district fence with her bow and arrows, and trading goods on the black market with her best friend Gale to help feed their families.

Portrayed by: Josh HutchersonPeeta is the son of the baker in District 12, and therefore he belongs to one of the "wealthier" families of the poor district.He once helped Katniss from dying of starvation by burning a loaf of bread and tossing it to her -- and has always secretly had a crush on her. When his name is drawn on Reaping Day, he accompanies Katniss to the Capitol as one of the tributes for the annual Hunger Games.In his broadcast interview, he reveals his love to Katniss, something she first believes is part of a strategy, something that is later proved wrong.

Portrayed by: Liam HemsworthGale is Katniss' best friend. They become close after losing their fathers in a mine explosion -- and a chance meeting when hunting illegally outside the fenced boundaries of District 12.Like Katniss, Gale is the sole provider for his family of younger siblings and mother -- and has a deep rooted hate for the Captiol, the dominant force in Panem.

Portrayed by: Willow ShieldsPrimrose, known as 'Prim', is the younger sister of Katniss Everdeen. When Prim is chosen as the tribute in the 74th Hunger Games, Katniss volunteers herself and steps up to take her place.

Portrayed by: Elizabeth BanksEffie escorts the tributes from District 12 to the capital for training and media interviews and then to the Games.At first, she detests her job, doing her best to be promoted to a better, richer district. But as time goes by, Effie gets attached to her District 12 acquaintances.

Portrayed by: Donald SutherlandPresident Snow is the leading figure of Panem. Depicted as a cruel and evil man, he holds the districts of the country tight under the control of the Capitol. As Katniss and Peeta rebel against the control method that is the Hunger Games he is vicious and deadly in his retribution.

Portrayed by: Woody HarrelsonHaymitch is a former District 12 tribute and winner of the 50th Hunger Games, who is now a middle-aged drunk.Because he is the only living Hunger Games victor in District 12, he is forced to be mentor to both District 12 tributes every year for the games, teaching them everything he can to heighten their chances of survival.

Portrayed by: Wes BentleySeneca Crane is the Head Gamemaker for the 74th Hunger Games, the one who controls all the action.

Portrayed by: Isabelle Furhman, Alexander Ludwig, Jack Quaid and Leven Rambin, respectivelyThese formidable Tributes are eager to be in the Games, having trained for it most of their lives. Cato especially proves to be a bloodthirsty participant.

Portrayed by: Amandla StenbergRue is the youngest participant in the Games from District 11. Everyone underestimates her as she is small but she evades the other tributes by jumping from tree to tree. She helps Katniss evade the career tributes, so they become allies.

Portrayed by: Stanley TucciCaesar Flickerman is the Captiol's favorite television host. As a very charismatic and rambunctious person, he delights the Capitol by interviewing all of the tributes.

Portrayed by: Lenny KravitzCinna is Katniss's stylist in the Hunger Games. He is a trusted and crucial ally and resource for Katniss. His efforts play a major role in securing sponsors for Katniss, which increases one's odds and provides assistance throughout the tournament.

Portrayed by: Toby JonesClaudius Templesmith is the announcer during the Hunger Games.