Move over, Mark Sanchez! Broncos footballer Tim Tebow has signed a deal to play for the NY Jets, and now both eligible bachelors will share the spotlight as quarterbacks. 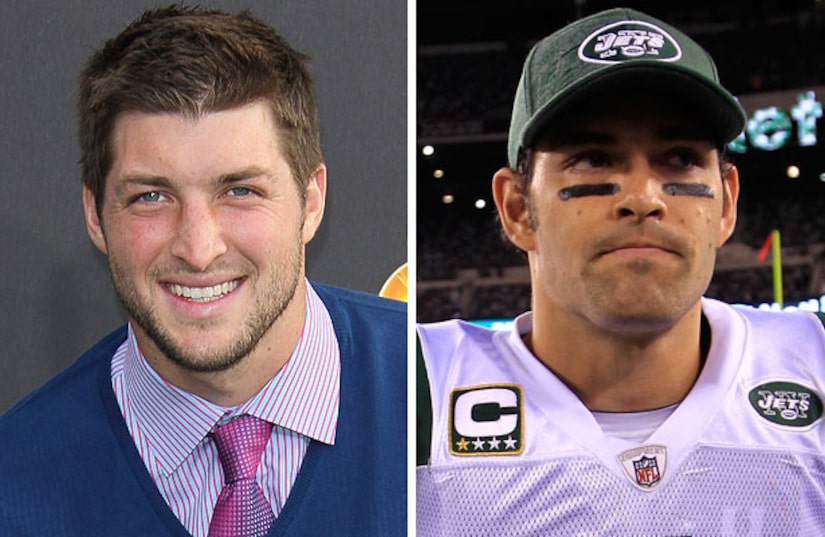 Tim, known for his moment of silence and prayer before each game in a pose dubbed "Tebowing," has publicly said he is a virgin and is saving himself for marriage. On the other hand, Sanchez is known to be quite the ladies' man and has been linked to model Kate Upton and Kim Kardashian.

"Extra's" Adrianna Costa spoke to Tim at last summer's Espy Awards, asking about his dating life and who he had his eye on. Tebow replied, "Oh, no one right now."

Tebow has been linked to Olympian Lindsey Vonn, Taylor Swift and Katy Perry -- who dedicated a song to Tim during her Super Bowl performance. It was said that Perry's religious parents were trying to set her up with the handsome athlete.

Sanchez also spoke with Adrianna, saying he is currently single, and that any girl he dates "needs to pass the mom test. That's the first thing." He added, "I like someone who likes to have fun."

The hunky quarterback was recently linked to Olympic skier Lindsey Vonn, but quickly denied the rumor.Tebow is single!

Saving Himself for Marriage

Deeply religious, Tim has made a personal, public declaration -- he's a virgin.

Tim spends a lot of his off-time at the hospital with sick kids.

Tim, a Heisman Trophy winner, doesn't take himself too seriously. The 24-year-old's funny outtakes can be seen on his DVD, "Everything in Between."

Doctors told Tim's mother not to go through with the pregnancy due to life-threatening complications, but of course, she refused... and a talented athlete was born.

Born in the Philippines

The youngest of five children, Tebow was born in Makati City in the Philippines, to American parents who at the time were serving as Christian Baptist missionaries.

Tebow was homeschooled by his mother, who worked to instill the family's Christian beliefs. When the family moved to Jacksonville, Florida, Tebow was allowed to play football for Nease High School, under a law that specifies homeschooled students may participate on the team of the local school in the school district in which they live.

As one of the most highly recruited quarterback prospects in the nation, Tebow received an athletic scholarship to attend the University of Florida from2006 to 2009.

Tebow was awarded the Heisman Trophy in 2007.

In 2010, a new rule for the next NCAA football season, dubbed "The Tebow Rule" by media, banned messages on eye paint. Tebow frequently wore references to biblical verses on his eye black, which resulted in huge Google searches during or shortly after the game.

Tebow was drafted by the Denver Broncos in 2010, and on July 29, signed a five-year contract with the Broncos that had a base value of $11.25 million. In2011, he became the team's starting quarterback.

With his unorthodox skillset, frequent expressions of religion, and ability to help his team win, Tebow has attracted unprecedented praise, criticism, andattention from the sports media and beyond.