Blondie singer Debbie Harry caused a commotion on Sunday morning when she left the Mercer Hotel in NYC and was mobbed by photographers who called the name "Lindsay Lohan" -- who had hosted "SNL" the night before and was also staying at the hotel. 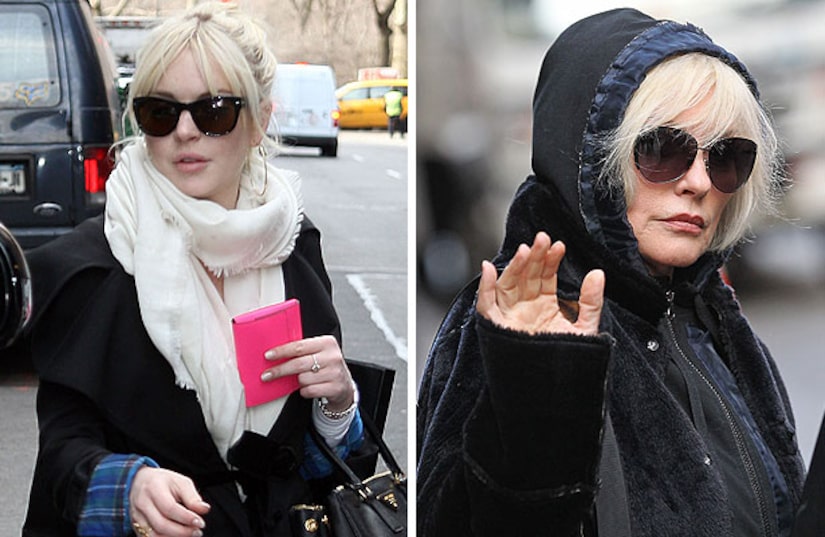 According to the NY Post, the paparazzi wasn't that far off, with Harry's platinum blonde hair, similar complexion and face structure to Lohan, the sunglasses, even though there's a 41-year age difference.

The mistaken identity isn't a coincidence. The 25-year-old has sparked criticism in the recent months for changing her appearance -- with overly bleached hair, fuller cheeks and bigger lips. Some reports claim the actress received facial fillers, causing her to look much older.

A young, fresh-faced Lindsay Lohan attended the NYC premiere of "The Rookie."

Showing off her bling and curly hair, a glammed-up Lohan arrived to MTV's New Year's Eve celebration in NYC.

A blonder, thinner Lohan showed up to the 7th Annual Young Hollywood Awards in L.A.

Going for a bombshell look, Lindsay headed to the 2005 MTV Music Awards in NYC.

Lindsay showed off her elegant side in this photoshoot for "A Prairie Home Companion" in Berlin.

The foxy actress arrived to the L.A. premiere of "Just My Luck."

A gorgeous 21-year-old Lindsay stepped out for the premiere of "Cloverfield" in Los Angeles.

A casual-looking Lohan attended an event at Kitson in West Hollywood.

Lindsay wore a revealing dress to the 2010 MTV Movie Awards in L.A.

In one of many court appearances, Lindsay wore a black suit and looked pensive.

Traveling to Italy, Lindsay showed off her sexy back at an amfFAR event.

Opting for a dramatically different look with bangs and a white dress, the actress posed at a Fashion Week event in NYC.

Just a few weeks after the Fashion Week event, Lindsay stepped out for an Oscars party.The starlet's fuller cheeks and larger lips prompted plastic surgery speculation, with Daily Mail reporting her "pillow face" is likely from overuse of facial fillers.