A woman has accused Grammy winner Chris Brown of grabbing an iPhone out of her hand outside a Miami nightclub last Sunday. 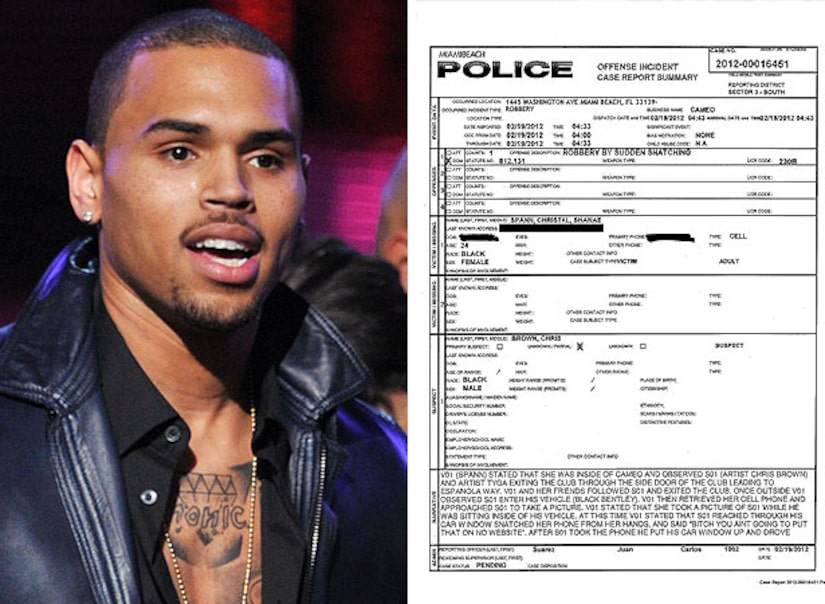 Miami Beach Police confirmed to "Extra" that an incident report was filed against Brown for suspicion of "robbery by sudden snatching," but that the hip-hop singer, on probation until 2014 for beating Rihanna, has not yet been charged or accused of any crime.

The Miami-Dade state attorney Katherine Fernandez Rundle released a statement, "My prosecutors are currently speaking with witnesses and reviewing all of the materials supplied by Miami Beach Police. Only after these reviews have been completed would any type of action be considered or taken. This is the basic process that every criminal case in Miami-Dade County undergoes."

Per the police report, the woman, Christal Spann, followed Brown outside Club Cameo in Miami Beach and took a picture of him while he sat inside his Bentley.

Spann claimed Brown then reached out the window and grabbed the phone from her hand, saying, "B**ch, you ain't gonna put that on no website" and took off with the phone.

Watch the video of Spann talking to police, courtesy of TMZ.

Up to this point, Brown has received glowing probation reports since pleading guilty to felony assault and performing community service.