Gisele Bundchen's F-rated tirade has evoked a front-page backlash after she dissed Tom Brady's Patriot teammates, saying, "My husband can't f***ing throw and catch the ball at the same time. I can't believe they dropped the ball so many times." 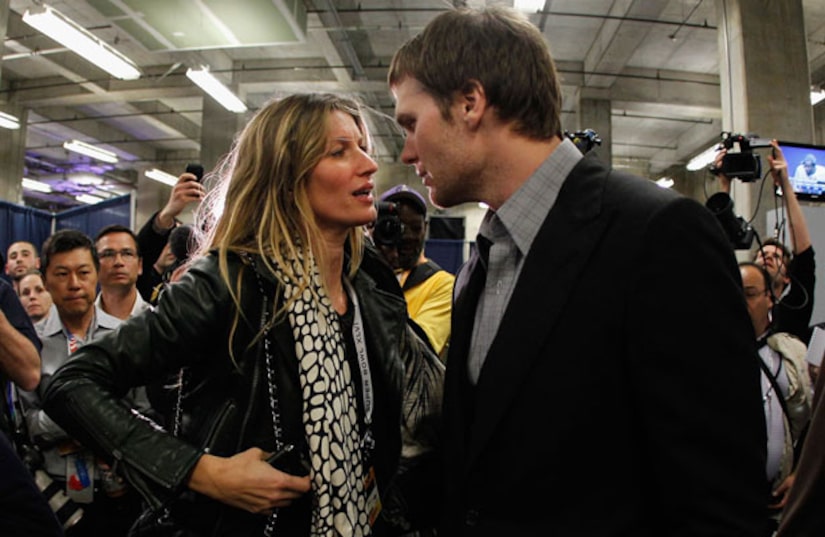 Tom's teammates have kept quiet after learning of her criticism, although Patriots spokesman Stacey James just shook his head when asked to comment. The wife of a Patriots player told the Chicago Sun-Times, "Gisele has very few friends among the wives. Of course, many are jealous of her looks and all that, but she doesn't make it easy to like her, since she obviously feels so superior to all of us."

Brady was reportedly upset after hearing about his wife's outburst, realizing the awkward situation he could potentially face with his teammates.

Mrs. Brady's seething remarks have also angered Patriot fans, with one commenter on Boston.com writing, "Not cool to curse at people and even WORSE to criticize your husband's teammates in public."

Another fan blamed the team's loss on Bundchen: "Maybe she is the reason he hasn't won a Super Bowl since hooking up with her!"

After Sunday's Super Bowl game, the supermodel's frustration seemed to subside after seeing her husband by the locker rooms, as Bundchen threw her arms around him and whispered words of encouragement.

The 31-year-old's unfiltered remarks have sparked outrage in the past -- which included slamming expectant mothers, calling them "garbage disposals" for gaining so much weight during pregnancy.