"Extra" host Maria Menounos is gearing up for the Super Bowl in Indianapolis. She spent some time with late-night funnyman Jimmy Fallon, and the two bowed down and rested their elbows on their knees, forming a pose called "Tebowing," made famous by Broncos quarterback Tim Tebow. 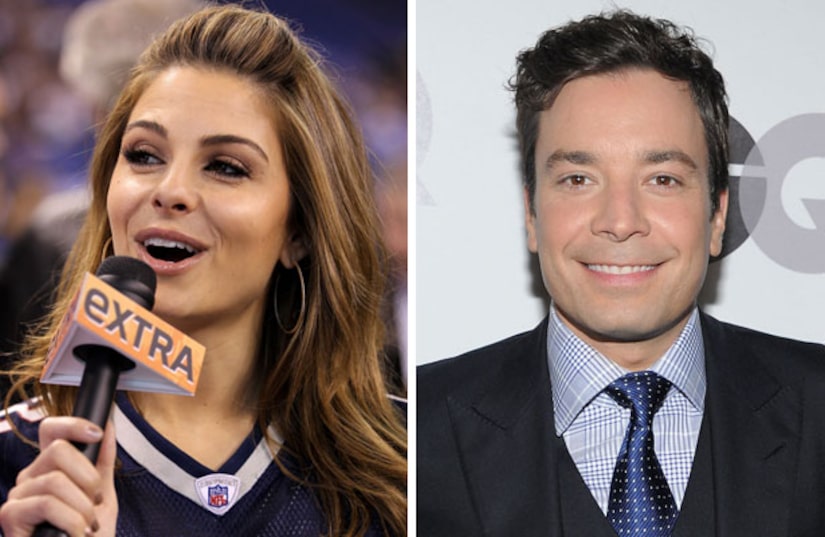 Maria said, "C'mon, Vogue!" and Jimmy replied, "C'mon, Tebogue! If someone started Teboguing it would be giant!"

Have you voted in "Extra's" Super Bowl Smackdown Yet?

Speaking of giant, Fallon said, "Politically, it's not smart for me to pick a side," referring to whether he is rooting for the Patriots or the Giants. Jimmy confessed, "I'm a Jets fan, so I'm New York. I'll tell you, but don't tell anyone."

The actor, who will host his first live show for "Late Night with Jimmy Fallon" after the game on Sunday night, said, "Right after the Super Bowl, we've got Adam Sandler, Andy Samberg, Flo Rida... I'm doing a spoof of 'The Voice.'"

Tom Petty performed during the 2008 Super Bowl at the University of Phoenix Stadium in Glendale, Arizona.

Diana Ross got whisked away in a helicopter during her song, "Take Me Higher" at the Sun Devil Stadium in Tempe, Arizona.

The Boss rocked the Super Bowl show at the Raymond James Stadium in Tampa, Floria.

Prince performed in a rain-soaked halftime show at the Dolphin Stadium in Miami Gardens, Florida. The rain was not purple.

In a scorching pyrotechnics-filled show, Paul McCartney sang to the Super Bowl crowd at Alltel Stadium in Jacksonville, Florida.

The Who lit up the laser beamed stage at the Sun Life Stadium in Miami Gardens, Florida.

In an emotional tribute to the 9-11 victims, humanitarian super group U2 sang at the Superdome in New Orleans, Louisiana.

Perhaps the most memorable and shocking halftime show comes from Janet Jackson's 'Rock Your Body' performance with Justin Timberlake. Thanks to Ms. Jackson's wardrobe malfunction, future telecasts are delayed five seconds. The 2004 Super Bowl was held at the Reliant Stadium in Houston, Texas.

In 1993, the NFL decided to beef up it's halftime show in order to keep viewers tuned in. They decided to go straight to the top and have the King of Pop wow football fans everywhere.Michael Jackson was surrounded by 3,500 children during his unforgettable "Heal the World" performance at Pasadena's Rose Bowl.