An emotional and proud Oprah Winfrey celebrated the first graduating class of The Oprah Winfrey Leadership Academy for Girls in South Africa on Saturday. 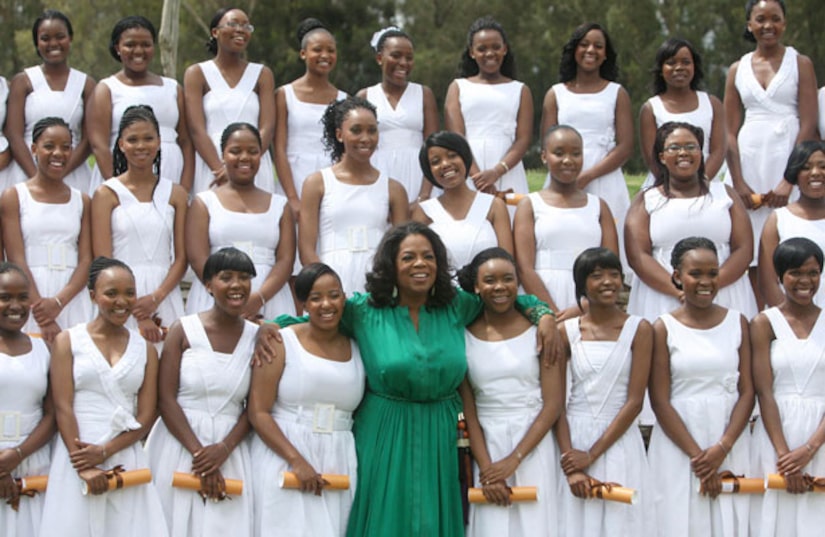 One hundred percent of the graduates have been accepted to college or university, and more than a dozen have received full scholarships.

"The pride that I feel today is overpowering," Winfrey told her guests, who included the students, their parents and relatives. "I have been on a mission my whole life to be able to give back what I have been given. Today I am fulfilling that mission. This class will prove that when you invest in the leadership of girls, you invest in a nation."

Winfrey also thanked Nelson Mandela, who served as an inspiration in establishing the school. "I want to thank Nelson Mandela for his leadership and support to help make this school a reality. Although he is not present with us today, I know he shares with us the same sense of pride and accomplishment," said Winfrey.

The OWN mogul opened the Oprah Winfrey Leadership Academy in Johannesburg in 2007, in the presence of Nelson Mandela. Nearly 3,000 girls from impoverished backgrounds and broken families applied. Only 150 of the best and brightest were selected.

Oprah's historic "Diet Dreams Come True" weight episode, in which she celebrated her 67-pound weight loss (in super skinny jeans!) by wheeling a wagon full of fat onto the stage.

An unforgettably raw interview that helped people start thinking differently about having guns in the home. Kathy found her 10-year-old son Scott shot dead by his best friend, after he accidentally pulled the trigger of his dad's 350 Magnum.

Rudine Howard suffered from lifelong anorexia, and Oprah followed her story from 1989 to her death in 1994. When Traci Gold appeared with Rudine (age 29 and 58 lbs.), Traci insisted Rudine could overcome anorexia by taking steps to "fill your mind." Rudine heart-wrenchingly asked, "But how do you do it?"

Oprah and her fans were touched when they first met Mattie, an 11-year-old born with a rare form of muscular dystrophy. He had three wishes; to talk peace with his idol Jimmy Carter, to have his book of poetry published, and to meet Oprah. All three of his wishes were met before he passed away June 22, 2004.

'The Worst Day of My Life' Featuring Christine McFadden (2004)

After going on a walk one morning, Christine returned to find all four of her children shot dead, after her ex-husband broke into her house and killed them in their sleep. Christine's strength inspired millions, many of whom she met on a follow-up episode, who said Christine saved their lives.

An inspiring mother who was dying of cancer recorded videotapes with all her motherly advice for daughter Peyton. Erin passed away Oct. 31, 2008.

Oprah was moved to tears when reunited with her teacher, Mrs. Mary Duncan. Oprah explained in her "The Oprah Winfrey Show - 20th Anniversary Collection" that she broke down after realizing that the woman she grew up idolizing really was a real woman, with a real name and real children.

After her entire face was burned in a tragic accident (caused by a drunk driver), Jacqui's face was transformed, yet she still believes she is a beautiful person, inside and out.

Her candid interview after her drunk driving accident that almost killed her husband and injured her children sent shockwaves to viewers.

On May 23, 2005, Tom Cruise hopped on Oprah's couch, professing his love for then new girlfriend, Katie Holmes.

Show producers surprised Oprah for the 24th season premiere on September 8, 2009 with a flash mob (21,000 people) in Chicago's Magnificent Mile, dancing to The Black Eyed Peas' "I Got a Feeling."

It was the ultimate Oprah surprise moment! Her TV idol, Mary Tyler Moore surprised her, walking out on stage behind -- insert Oprah's "ugly cry."

After allegations that James Frey's memoir "A Million Little Pieces" (which Oprah helped make a best seller) wasn't completely true, Oprah invited Frey back to the show in January 2006 to set the record straight. Oprah laid into Frey with, "I have to say it is difficult for me to talk to you because I feel really duped."

Oprah surprised her entire audience and spontaneously took them on a trip to Philadelphia. From the reaction, you'd think they'd just won a trip to Paris.

Jake Simpson, a Star Search Grand Champion, performed Stevie Wonder's "Isn't She Lovely?" -- only to be shocked when he turned around and Stevie was performing along with him. His "Oh my god" reaction was unforgettable.

This "Oprah" moment is unforgettable for two reasons; first, Nancy's reaction to Oprah telling her she's going to come to Chicago to meet Tom Cruise is beyond hilarious. And second, watching Tom crack up at Oprah, who was wearing a bathrobe (no makeup!) at the time she taped the doorbell surprise.Watch the video! [https://www.oprah.com/oprahshow/Tom-Cruises-Biggest-Fan-Video]

An amazing weight loss story plus an incredible giveaway -- equals a big TV moment! Dave lost 305 lbs., and Oprah told him he could just sit in the Porsche which was rolled out on stage. Kidding! "David, it's yours!"

Flat screen TVs, washer/dryer sets, $500 Office Max gift certificates -- it was one of the most touching Favorite Things episodes -- for teachers!

Oprah hair and makeup circa 1980s, interviewing the equally glam (yet completely closed-mouth) Elizabeth Taylor, one of the toughest celebrity interviews of her career, as Liz told Oprah just minutes before taping she would not talk about any of the men in her life, just her perfume.

When asked how the show changed their lives, Jennifer Aniston eerily answers, "I haven't been bombarded by people and I don't feel as if it's changed my life."

An unforgettable, racially-charged episode, in which Oprah filled her audience with members of the all-white Forsyth County to discuss racism.

Mackenzie revealed to Oprah her drug-addicted past and her sexual relationship with her father, the late Mamas and Papas legend, John Phillips.

An hour-long, live tribute to the talk show queen with surprises by her faves; John Travolta, Tina Turner, Julia Roberts, Stedman and more! This time, unlike her 40th, there were no balloons covering the studio floor (she later admitted to being afraid of balloons).