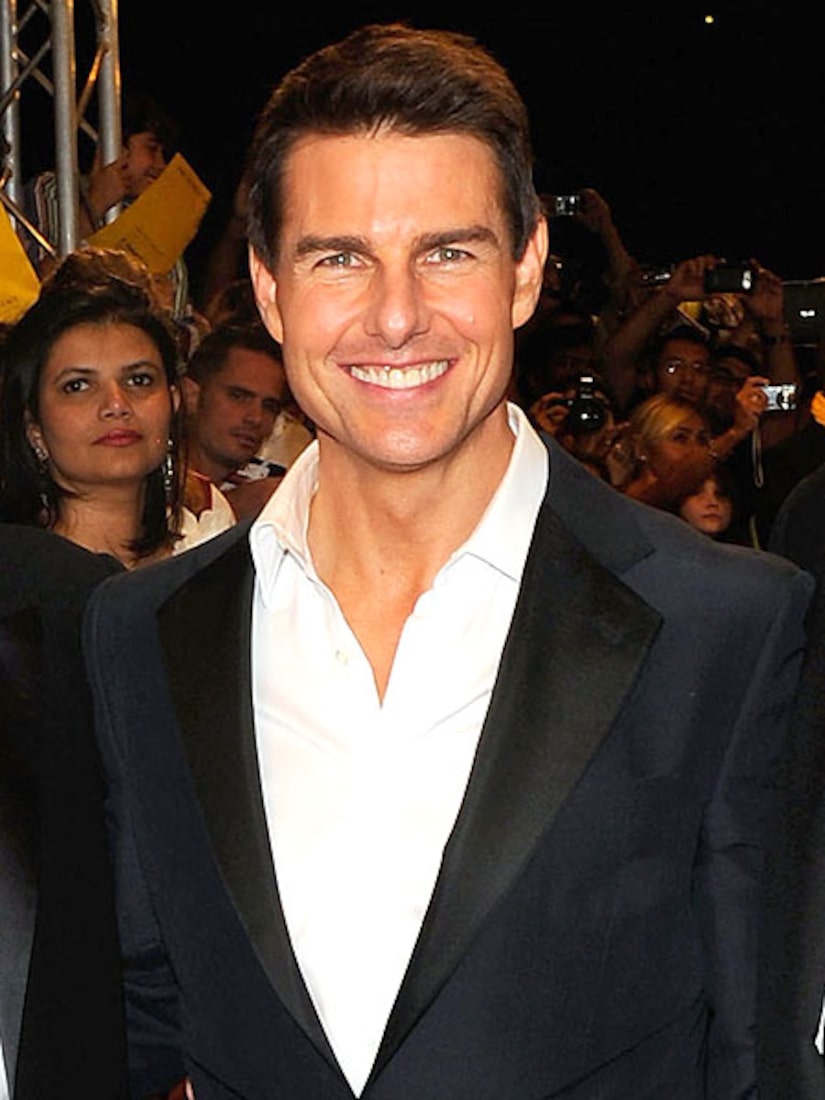 Cruise spoke of his other movie, "Rock of Ages," in which he teamed up with rocker Jon Bon Jovi for some singing advice. We previously talked to Bon Jovi about his meeting with Tom, and the singer recalled, "[Tom] and I went out and he was very intense about how do you do this, and I was like, 'Relax man, you're Tom Cruise, you can learn to sing a song. Don't worry about it!'"

Tom gave a slightly different story, saying, "I said, 'Man, I'm gonna sing your song,' and [Bon Jovi] just looked at me and said, 'You know what to do.'"

The muscular Cruise, who trained tirelessly for his role as Stacee Jaxx, said, "You know, dancing... my hat's off to all dancers. I think they're the best athletes in the world, those guys."

Although it's hard to believe, the ageless actor revealed, "I'm gonna be 50... July 3rd." Cruise will be shooting a movie during that time, and predicted, "I think we'll have a big party. We'll have parties somewhere, but I'm gonna be on the set, and that's what I love doing."

As for the upcoming holidays, Tom said addressed his cooking skills, saying, "The family gets together and cooks breakfast, and everyone pitches in... I'm not slouch. I'm not a gourmet chef, but I can whip up some eggs." The Cruise family are "gonna chill. We like taking those times. We really just all hang together and play games. We're all just going to have a really nice, quiet time."

When asked the secret to looking so youthful, Cruise replied, "No sleep. Three kids... you gotta go, go, go!"

Tom also talked about possibly being in another "Top Gun" movie. What do you think?

Cruise knew he wanted to go into acting after starring in his high school's production of "Guys and Dolls," but he also wrestled and played football.

He has been nominated for three Academy Awards and won three Golden Globes.

In 2006, Forbes magazine ranked Cruise as the world's most powerful celebrity.

Cruise proposed to Katie Holmes at the Eiffel Tower in Paris.

Cruise was the first actor to star in five consecutive films that grossed $100 million in the U.S.Those films were "A Few Good Men," "The Firm," "Interview with the Vampire: The Vampire Chronicles," "Mission: Impossible" and "Jerry Maguire."

Cruise and Katie Holmes both wore Armani at their wedding.

Cruise has played a member of the military in six different movies: "Taps," "Top Gun," "Born on the Fourth of July," "A Few Good Men," "The Last Samurai" and "Valkyrie."