Talk show veteran Regis Philbin was mobbed on his way to the set of "Live with Regis and Kelly," marking his final episode after 28 years on the show.

His friends and family were in the studio to bid him farewell, along with "Extra" host Maria Menounos, who brought Reege a bottle of champagne. The 80-year-old declared, "Let's get wasted!"

The final show was a star-studded event, with Hollywood well-wishers like Anne Hathaway and Justin Timberlake sending Philbin their appreciation. Timberlake said, "Thank you for years of laughs!" 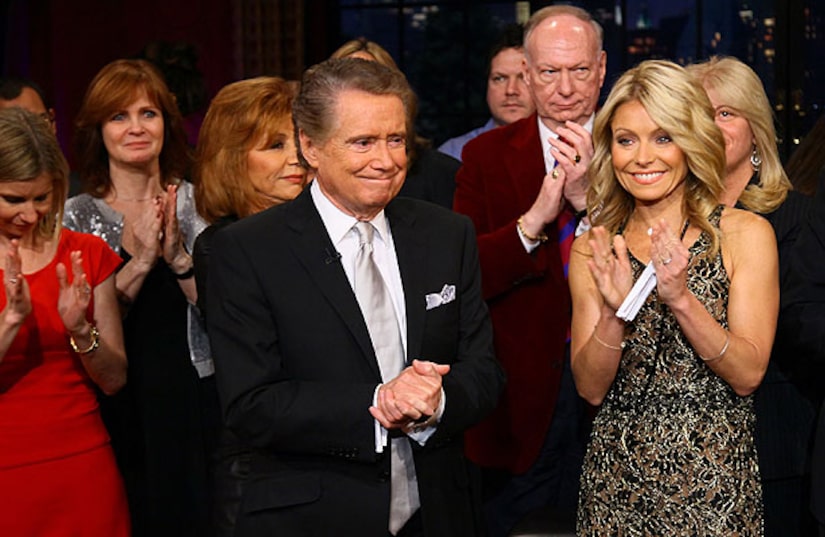 The festivities were filled with many surprises, from the Mayor of NYC handing the host a key to the city, to the emotional audience, filled with celebrities and friends, such as former "Live" co-host Kathie Lee Gifford, Donald Trump and Tony Danza.

Regis managed to stay in character throughout the show, although co-host Kelly Ripa looked like she had to fight back tears. Ripa, who replaced Gifford over a decade ago, said, "I've been in tears... massive tear extravaganza for two weeks. My goal is to hold it together for a few more minutes. It's been very challenging."

Philbin's farewell speech was brief but touching, as he thanked all the people who helped make his five-decade show biz career one of the most inspiring in Hollywood.

Moments after signing off, Regis said, "I feel great... I think the show went well."

Guest host Jerry Seinfeld will take over for Regis starting Monday, but the show has yet to permanently fill the coveted spot.

Who do think should take over? Vote now!