Radio bad boy Howard Stern expressed his anger and disgust at the most hated man in America -- alleged child molester Jerry Sandusky. At the "Breaking Dawn" premiere, Stern told "Extra," "They should cut his b**** off, I mean, what are you going to do with a guy like that? This is the real stuff that sickens me and should sicken all Americans." 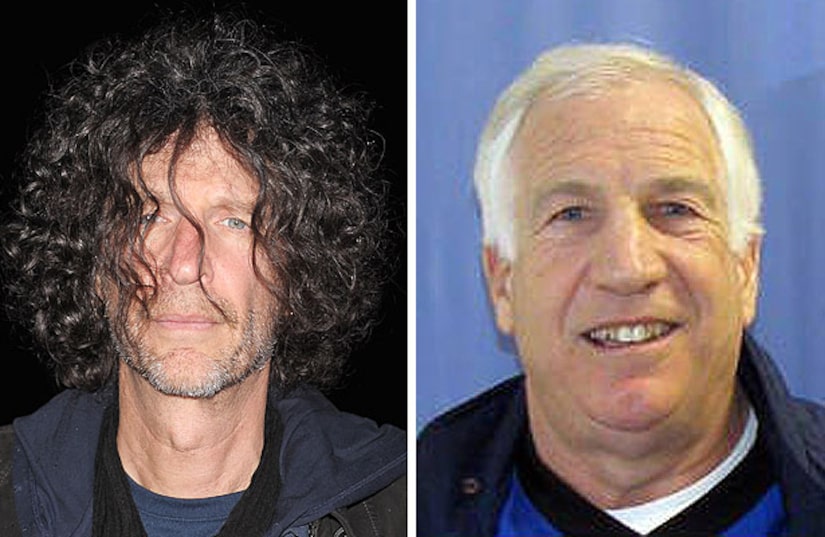 A new, disturbing report revealed prosecutors knew about the accusations against the former Penn State coach years ago, but didn't have enough evidence to prosecute. Police said they had no record of Assistant Coach Mike McQueary's report, which claimed he alerted the authorities after he witnessed the alleged campus shower abuse.

In an email, McQueary wrote, "I did stop it, not physically, but made sure it was stopped when I left that locker room. I did have discussions with the official at the university in charge of police. No one can imagine my thoughts or wants to be in my shoes for those 30-45 seconds... trust me."

Stern weighed in, saying, "Here's a tip for America! If you see a young boy being raped in a shower, walk over and punch the idiot in the mouth who is raping him!"

The controversial radio host added, "A real man steps up and says 'This is wrong,' and they do the right thing."

Fellow New Yorker Donald Trump also blasted McQueary, saying, "For him to have just sat back and done nothing, and report it to his father... I think he is really one of the worst of the group."

Meanwhile, Sandusky's accusers are preparing to testify against the 67-year-old -- who has been charged with 40 counts related to sexual abuse of eight boys over a period of 15 years. More victims are believed to have surfaced since the charges were filed.

In other Howard news, the 57-year-old is in talks to appear as a judge on "America's Got Talent," and told "Extra," "I judge at home, so I might as well go on TV and judge. I would make an excellent judge, dare I say the best judge on television... in fact, I have the hair of a judge, all I have to do is get the powdered wig."