Hot couple George Clooney and Stacy Keibler walked the red carpet for the Los Angeles premiere of "The Descendants" on Tuesday, where Clooney, picked twice for People's Sexiest Man Alive, told "Extra" he was rooting for his "Ides of March" co-star, Ryan Gosling, to take the title, even though Bradley Cooper ended up on the cover. 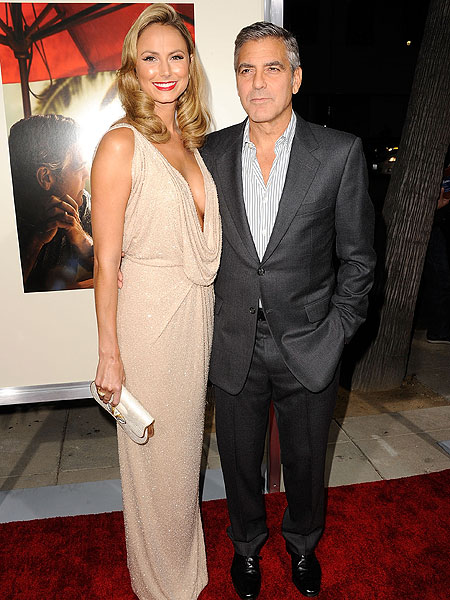 Clooney joked, "He [Gosling] really wants it. He's been saying... the whole time we were on the set of 'Ides,' he was like, 'How did you pull that off?' So I called up Brad Pitt and we worked with him for weeks on the walk... we told him how to train... everything."

George's lovely GF, Stacy, 32, opted for a sparkly, plunging ensemble, with her beau telling "Extra's" Renee Bargh, "She looks good, doesn't she? She's dressed up." Clooney's parents accompanied their famous son to the premiere, making it the first meeting between his folks and Keibler.

The actor, who plays a workaholic dad trying to reconnect with his daughters in "The Descendants," is already generating Oscar buzz for Best Actor.

Clooney also appeared in a candid interview with Rolling Stone, titled, "Confessions of a Dirty Mind," and said, "I have to have it [my mind] cleaned once a week."

Months after his breakup with Preston, Clooney and actress Talia Balsam took off for Las Vegas in a Winnebago and got hitched in 1989. They divorced 3 years later. The famous bachelor has made it public he did not want to marry again, and to this day has stayed true to his vow.

While filming "The Peacemaker" in Paris, the actor met 23-year-old waitress Celine Balitran in 1996. The couple continued to date for another three years before deciding to go their separate ways.

In 2007, George attended the Venice Film Festival with 28-year-old Sarah Larson. The two were involved in a motorcycle accident on his Harley and the actor suffered a hairline rib fracture and Larson broke her foot. The following year, the couple called it quits.

In 2009 Clooney met and fell in love with Italian model and actress Elisabetta Canalis, 30. After celebrating George's 50th birthday in May, the couple ended their two-year romance announcing to People on June 22, "It's very difficult and very personal, and we hope everyone can respect our privacy."