Hunky actor Bradley Cooper flashes his killer smile on the cover of the latest issue of People. The "Hangover" star was named 2011's Sexiest Man Alive! 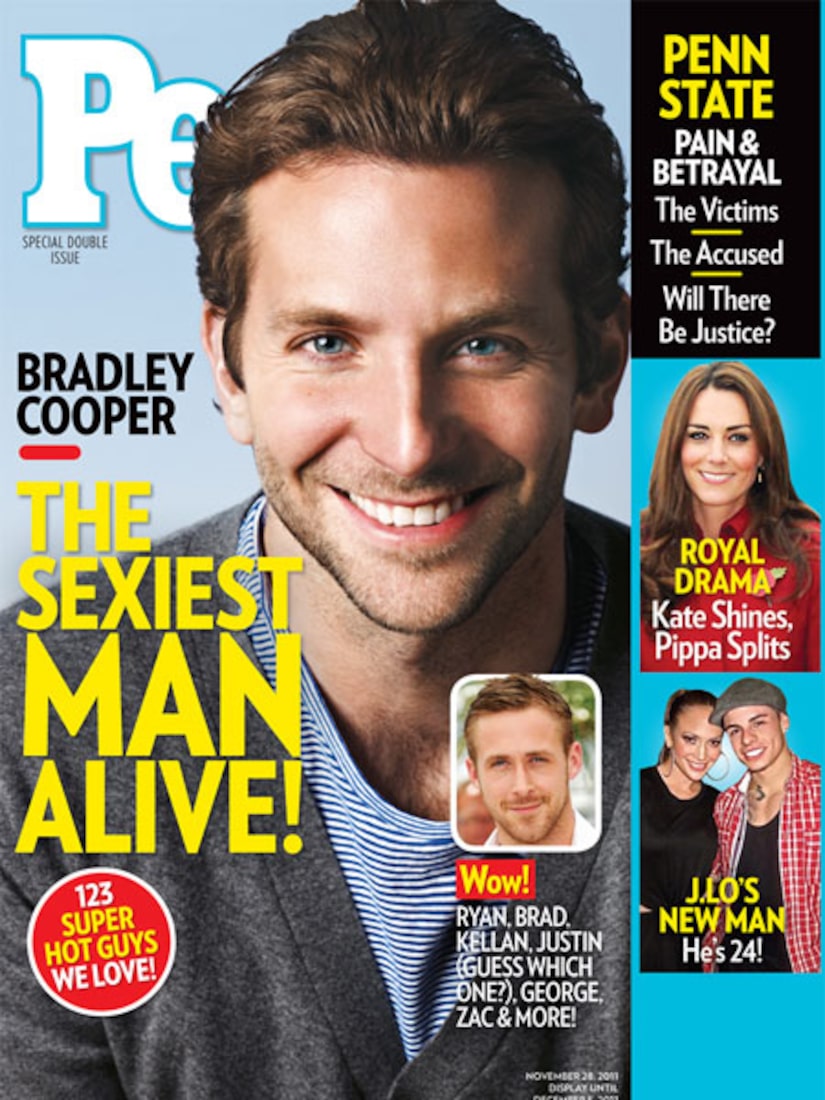 The dapper 35-year-old said, "I think I'm a decent-looking guy. Sometimes I can look great, and other times I look horrifying."

One of Hollywood's most eligible bachelors isn't just a pretty face. Cooper graduated from Georgetown University, speaks fluent French and shares a close relationship with his mother, Gloria. After learning he was crowned Sexiest Man Alive, Cooper said, "The first thing I thought was, my mother is going to be so happy."

Although Bradley insists he is single, he was recently spotted with Jennifer Lopez. "If you're a single man and you happen to be in this business, you're deemed a player. But I don't see myself as a ladies man," he admits.

The star dated Renée Zellweger for two years before they went their separate ways in March.

Brad Pitt and George Clooney are also on the list of sexy men this year, along with Ryan Gosling and Ryan Reynolds. Pitt recently joked with "Australia 60 Minutes" that between him and Clooney, he'd have to go with himself as sexier. "I'm going to go out on a limb and say me. It's all in good fun."

People's "Sexiest Man Alive" issue will be on newsstands November 18!

Things You Need to Know About Bradley Cooper

"I loved the college experience of studying. I was very grateful to be there. I applied out of high school and I didn't get in and then I applied as a transfer and got in," says the actor who graduated from the school's honors English program in 1997. "I felt honored to be there, so I worked my ass off. The whole time I was there I thought I wasn't smart enough so I felt like I had to."

Likes a Down to Earth Woman

As for what quality Bradley looks for in a partner, he has said, "Give me an authentic woman, and I'm happy."

The actor has been previously linked to Cameron Diaz, Jennifer Aniston and was briefly married to actress Jennifer Esposito. He is currently dating Renee Zellweger.

He Has Two Rescue Dogs

"I have two beautiful dogs that I cherish. Samson is a 14-year-old German short hair pointer and Charlotte is a 6 or 7-year-old Chow Retriever mix. They are both rescue dogs and they are the best ... I'm sort of a hybrid of both my dogs. Samson is stoic and makes me earn it and Charlotte loves me undyingly. They're my kids."

"When I was a kid, I remember watching "Chariots of Fire." French is the official language of the Olympics. So there's a scene where a guy was speaking French and I thought, 'Man, that sounds so cool. I want to learn French.'"

He's a Master in the Kitchen

"I seriously love to cook ... My grandmother was an amazing cook. As a kid I used to help her make handmade pasta, Cavatelli and Ravioli. It was one of my favorite things to do. I love the idea of making whatever is in the fridge into something."

Some of his favorite books are "Lolita," "A Home at the End of the World," and "Ask the Dusk."