Fans of the AMC show "Breaking Bad" saw a gruesome end to one of the main characters when Season 4 ended Sunday night. 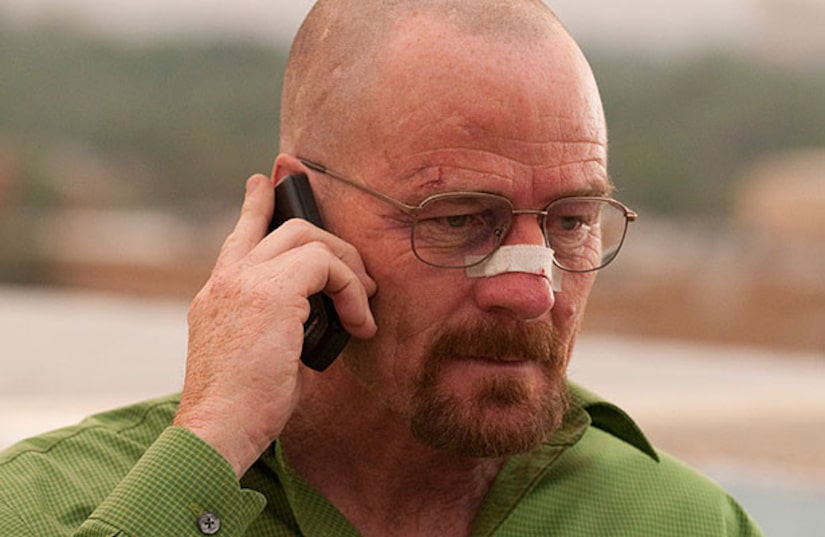 "I knew they couldn't stretch out the story line too much longer," co-star Aaron Paul told "Extra's" Maria Menounos.

"It's that 'Oh my god' [kind of] moment," Cranston told MTV News. "What's great about it is, for some reason, I didn't see it coming. You have a situation where Walt is trying to make this bomb. He has a detonator. It doesn't work because [Gus] didn't go to the car, so now he has to think up some ulterior motive."

"We lose Gus Fring as a character, but I've gained Giancarlo Esposito as a friend," Cranston added. "That's more valuable than anything. He's a wonderful man and a terrific actor, a very gracious, very giving, spiritually sound guy who's just embraceable. I have that [friendship] to look forward to."

Watch an inside look at MTV!

Walt: "Castor beans."Jesse: "So, what are we going to do with them? Are we just gonna grow a magic beanstalk? Huh? Climb it and escape?"Walt: "We are going to process them into ricin."Jesse: "Rice 'n Beans?"Walt: "Ricin. It's an extremely effective poison."

Jane: "Do you know what this is?"Jesse: "It's a whole lot of cheddar."Jane: "This is freedom. This is saying, "I can go anywhere I want. I can be anybody." What do you want to be? Where do you want to go? South America? Europe? Australia?"Jesse: "Is New Zealand part of Australia?"Jane: "New Zealand is New Zealand."Jesse: "Right on. New Zealand. That's where they made "Lord of the Rings". I say we just move there, yo. I mean, you can do your art. Right? Like, you can paint the local castles and shit. And I can be a bush pilot."

Jesse: "Ah, like I came to you, begging to cook meth. Oh, hey, nerdiest old dude I know, you wanna come cook crystal? Please. I'd ask my diaper-wearing granny, but her wheelchair wouldn't fit in the RV."

Walt: "Look, Skylar, I just haven't quite been myself lately. I haven't been myself lately, but I love you. Nothing about that has changed, and nothing ever will. So right now, what I need is for you to climb down out of my ass. Can you do that? Will you do that for me, honey? Will you please, just once, get off my ass. You know, I'd appreciate it. I really would."

Gus: "A man provides. And he does it even when he's not appreciated, or respected, or even loved. He simply bears up and he does it. Because he's a man."

Jesse: "Battery's dead."Walter: "Jesse. Back when I asked you to put the keys in a safe place, where did you put them?"Jesse: "I left them right here. In the, um... the ignition."Walter: "Son of a bitch!"Jesse: "Whoa whoa. No, this is not my fault, alright? The buzzer didn't buzz."Walter: "The WHAT?"Jesse: "The buzzer! The buzzer that buzzes when you put the keys in. To like let you know that the battery's on. I know that! It didn't buzz. Look, I didn't turn the key or anything, alright? I'm not stupid. Did you hear the buzzer buzz? I did not... It's faulty, it's a faulty mechanism."Walter: "Is this just a genetic thing with you? Is it congenital? Did your, did your mother drop you on your head when you were a baby?"Jesse: "THE BUZZER DID NOT BUZZ and you were the one that made me move the keys in the first place, REMEMBER?"Walter: "Yes, I see your point. Your imbecility being what it is, I should have known to say JESSE, DON'T LEAVE THE KEYS IN THE IGNITION THE ENTIRE TWO DAYS."Jesse: "I wanted to leave them on the counter. B**CH. Oh, I'm sorry, oh, the 'work station.' Jesus."Walter: "Okay, just... Alright so, we need to jump the battery somehow."Jesse: "Okay. How?"

Walt: "Last time I checked, there was 16 ounces to a pound What'd you do with the rest, smoke it?"Jesse: "Yo I been out there all night slangin' crystal. You think it's cake movin' a pound of meth one teenth at a time?"Walt: "So why you selling it in such small quantities? Why don't you just sell the whole pound at once?"Jesse: "To who? What do I look like? 'Scarface?'"Walt: "This is unacceptable. I am breaking the law here. This return is too little for the risk. I thought you'd be ready for another pound today."Jesse: "You may know a lot about chemistry man but you don't know jack about slangin' dope."

Jesse: "Yo, I get I shouldn't call, but I'm in a situation over here, and I need my money."Walter: "I just gave you $600."Jesse: "Yeah, and thanks, Daddy Warbucks, but that was before my housing situation went completely testicular on me, okay?"