Actress/singer Zooey Deschanel stopped by The Grove to chat with "Extra's" Mario Lopez about her new hit FOX show, "New Girl, dancing like a chicken, and being an aunt. 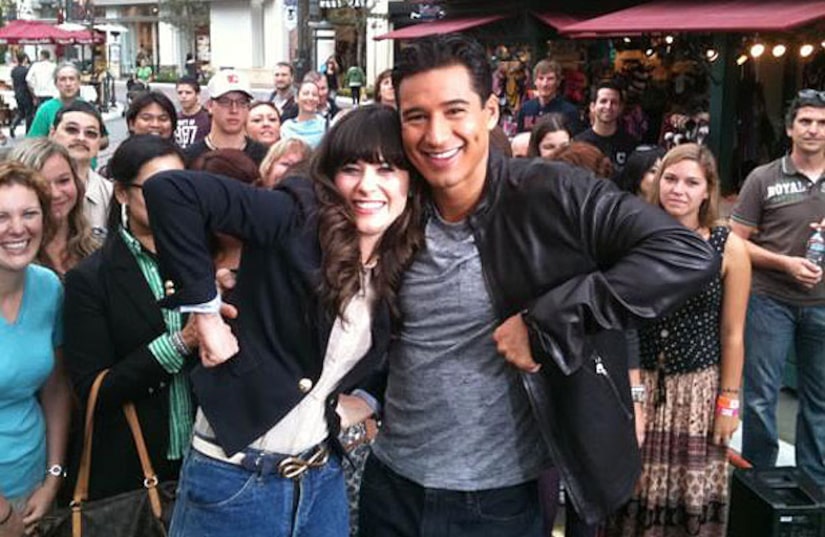 Deschanel described her character, Jess, as being a little bit like her. "I think she's the 13-year-old me," she laughed. "I'm not mature at all. I'm more like 15."

Zooey was excited about Tuesday's episode. "Nick, one of the characters, his girlfriend just dumped him six months ago. We are going to a wedding and I have to pretend to be his girlfriend to make his ex jealous."

The quirky star did say there might be some dancing, such as the Chicken Dance. "Maybe! I don't want to give it away... I'm a passable dancer, but I love to dance."

On her sister, "Bones" actress Emily Deschanel's new son, Zooey gushed, "He's so cute. He's 2 weeks old, doesn't do much yet. He touches his face a lot. Hey, he didn't know he had a face! I'd touch my face a lot if I just found out I had a face two weeks ago!"

The singer also said her folk duo She & Him -- which she described as "Arena Folk" ("Folk music you can listen to in an arena") -- will release a Christmas album in October. "I know it's early, but it's to get people ready for the holidays."

Pretty ladies Katy Perry and Zooey Deschanel are both singers. Although Deschanel is a well-known actress, she also sings in an indie folk band called She and Him.

These two actresses know how to pull off their short blonde dos with side swept bangs. Could they pass for sisters?

It looks like Dustin Hoffman has a French twin! French film and theatre actor François Cluzet, best known for his 2006 film "Tell No One," even has the same salt-and-pepper hairstyle as Hoffman.

These two peas in a pod have more than just a pretty face in common. Both actresses took on big roles in successful films. Chloe played Hit-Girl in superhero movie "Kick Ass" while Elle Fanning was the sweet daughter trying to get to know her father in "Somewhere."

Good-looking hunks Jeffrey Dean Morgan and Oscar winner Javier Bardem shine in Hollywood together. But don't get them mixed up, Jeffrey Dean Morgan is best known for his role in "Watchman," while Bardem terrified audiences everywhere in his award-winning role as Anton Chigurh in "No Country for Old Men."

What a bizarre coincidence! Both Paris Hilton and British TV personality Chantelle Houghton rose to fame from reality shows.

Surprisingly, these two huge stars have a similar look!

Double take alert! Portia and Drea not only look similar, they also share the "de" in their names.