The concert promoter and producer of Michael Jackson's "This Is It" tour will return to the stand on Wednesday to continue his testimony in day two of the involuntary manslaughter trial of Dr. Conrad Murray.

Paul Gongaware, an executive with AEG Live, said Michael insisted on choosing Dr. Murray as his physician for his London tour, and that Murray had initially asked for a $5-million-a-year salary, claiming he would need to close four clinics and lay off employees. Gongaware said, "I told him there was no way that was going to happen." Instead, Murray accepted the job for $150K per month. 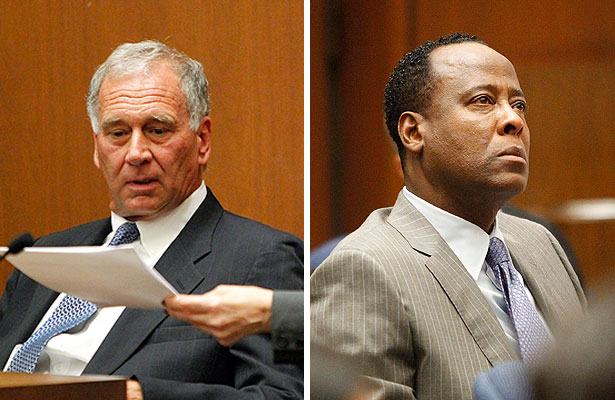 During an emotion-filled first day of the widely televised trial, Gongaware also said Jackson was "very enthusiastic about this whole tour." Day one included a shocking audio tape of the pop star sounding heavily drugged, and a chilling death photo of Jackson. As the tape was played, Michael's mother Katherine Jackson cried while holding daughter La Toya's hand.

The dramatic audio file was recovered from Murray's iPhone. Prosecutors used it to show that Murray was aware of Jackson's "state," as Murray continued ordering more drugs, according to Deputy District Attorney David Walgren, who addressed the jury in an even tone. "Michael Jackson literally put his life in the hands of Conrad Murray. That misplaced trust cost Michael Jackson his life."


Get the Michael Jackson Trial App

Murray's attorney, Ed Chernoff, explained scientific evidence showed that Jackson swallowed eight tablets of a sedative drug lorazepam ("Enough to put six of you to sleep") and then self-administered propofol while Murray was out of the room.


The trial is expected to resume at 9 AM PT.