The big showdown between Ashton Kutcher's debut on "Two and a Half Men" and Charlie Sheen's toasty roast over at Comedy Central had something for everyone. 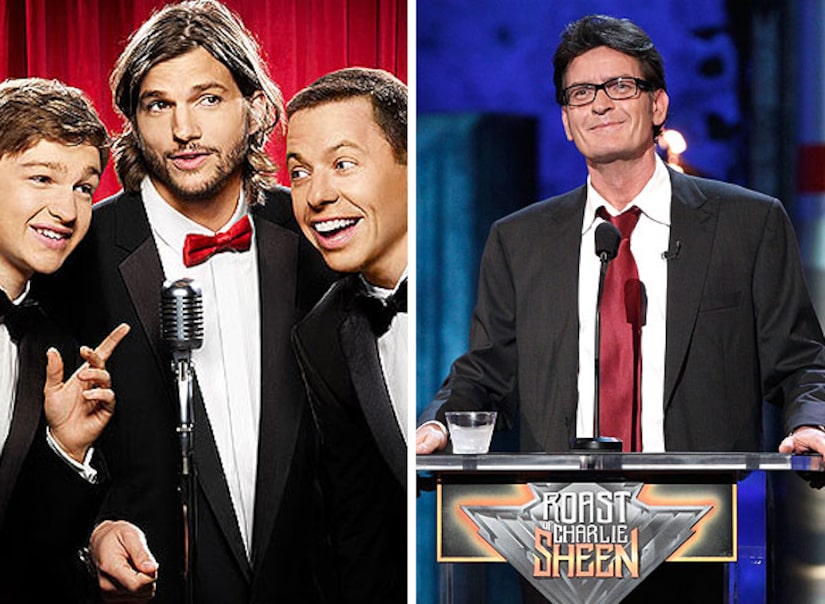 If you wanted to see how Kutcher fared on one of TV's most successful sitcoms, you tuned-in to "Two and a Half Men." The episode opened on the funeral of Charlie Harper (he was hit by a train in France), as his many lovers traded snide comments.

Then we were introduced to Kutcher's character, Walden Schmidt, a sweet, bereft billionaire doofus who is well endowed and could putting it to good use (yes, walking around naked). In this clip, Schmidt quite literally drops in on Alan Harper, played by Jon Cryer.

If you wanted raunchiness, f-bombs and wicked tongue lashings aimed at the now kinder, gentler Sheen, you watched "Comedy Central's Roast of Charlie Sheen." Here are some highlights:

Kate Walsh: "I have to say, Charlie, you are an incredible medical specimen. I guess that's one of the benefits of waking up every morning at the crack of crack... It's amazing -- after abusing your lungs, liver and kidneys, the only thing you've had removed is your kids."

William Shatner, 80: "How come we look like we went to high school together?"

Steve-O: "Charlie still hasn't hit rock bottom. He's looking forward to it though, because he thinks there's a rock there."

Sheen is expected to return to TV with a new show, "Anger Management," but you can keep watching Kutcher every Monday night on CBS!

UPDATE: The ratings are in! The return of "Two and a Half Men" more than doubled its demo ratings from a year ago with 28 million viewers, scoring a 10.3 rating with adults 18-49, and an overall rating of 5.7. Meanwhile, the Charlie Sheen roast was the highest rated in Comedy Central history!