"Extra" talked with the "Glee" gang at their sing-along event in Santa Monica - where they dished about what to expect this coming season on the hit FOX show.

Kevin McHale, who plays Artie Abrams, told "Extra" the first episode is "definitely an update of what the kids did over the summer."

"I'm kind of shocked we did some of the stuff we did," said Chris Colfer, who plays Kurt Hummel. "We had to have a lot of safety meetings, I'll say that," adding that it's mostly due to Jane Lynch's character, Sue Sylvester. "It's her fault!" 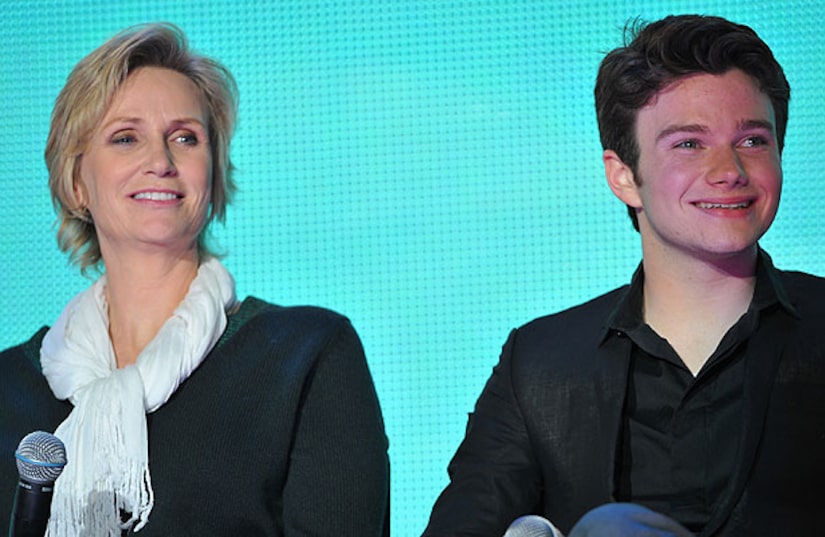 As for Lynch's upcoming stint as Emmy host, "Extra" asked the funnylady if there would be any special appearances by the "Glee" cast. "I don't know what we're going to do yet in terms of who we're going to ask to be in it, to be in skits."

Is Colfer nervous about what Lynch might say on live TV? "I am!" the actor laughed. "We're close, she knows some of my secrets, but I'm looking forward to it and I think she's going to be great."

'"I thought I smelled cookies wafting from the ovens of the little elves that live in your hair."

"What's that smell? It's coffee. It's usually masked by the smell of fear."

"So you like show tunes. It doesn't mean you're gay. It just means you're awful."

"I'm gonna make it a habit to not stop and talk to students because this has been a colossal waste of my time."

"I will no longer be carrying around photo ID. Know why? People should know who I am."

"You think this is hard? I'm passing a gallstone as we speak. That is hard!"

"I'm going to ask you to smell your armpits. That's the smell of failure, and it's stinking up my office."

"I'm all about empowerment. I empower my Cheerios to live in a state of constant fear by creating an environment of irrational, random terror."

"I don't trust a man with curly hair. I can't help picturing small birds laying sulfurous eggs in there, and I find it disgusting."

"Sometimes people ask me, 'Sue, how come you're so sensitive to minorities?" Well, I'll tell you why. Because I know firsthand how hard it is to struggle as a minority in America today. I'm 1/16th Comanche Indian. In fact, I like minorities so much, I'm thinking of moving to California to become one."

"I'm reasonably confident you will be adding revenge to the long list of things you're no good at, right next to being married, running a high school glee club, and finding a hairstyle that doesn't make you look like a lesbian. Love ya like a sister."

"That was the most offensive thing I've seen in 20 years of teaching — and that includes an elementary school production of Hair."