Philanthropist Rachel "Bunny" Mellon, who turns 101 on August 9, gave a rare interview with Newsweek, talking about her relationship with former Senator John Edwards, and about finding herself involved in his indictment for violating campaign finance laws. 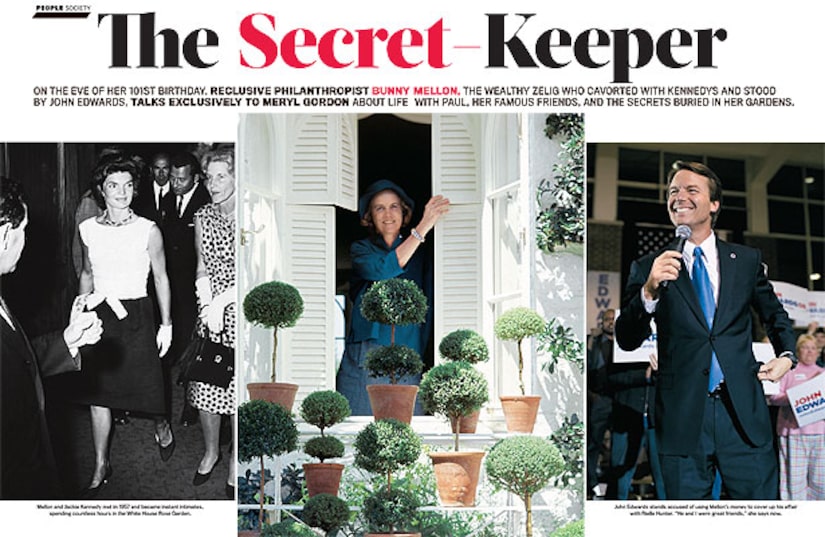 Although she has not been charged with any wrongdoing, prosecutors have said that the $725,000 Mellon gave to the former presidential candidate in 2007 and 2008 was used to conceal his extramarital affair with Rielle Hunter and the existence of their child.

"He would have been a great president," insisted Mellon, who has been interviewed by the FBI but is not expected to testify. "He and I were great friends... I was so surprised when this thing came up."

Mellon has always been on Edwards' side, rather than his wife, Elizabeth, who died last year from cancer. Mellon confided, "You know that John had a hard time with Elizabeth." Mellon's lawyer, Alex Forger, further elaborated on his client's attitude. "She was not enamored of his wife and didn't want his wife to know that he was getting money."

The former art collector and close friend of the late Jackie Kennedy now lives on her 2,000-acre Virginia farm. "I don't know what I've done that has made people so interested in me, more than anyone else," said Mellon.

Read the full interview at Newsweek.com or pick up the issue, on newsstands now.