Adding to his public feuds with Rosie O'Donnell, Bill Cosby and another with President Obama, Donald Trump is now in a war of words with... Jerry Seinfeld? Not Jerry?! 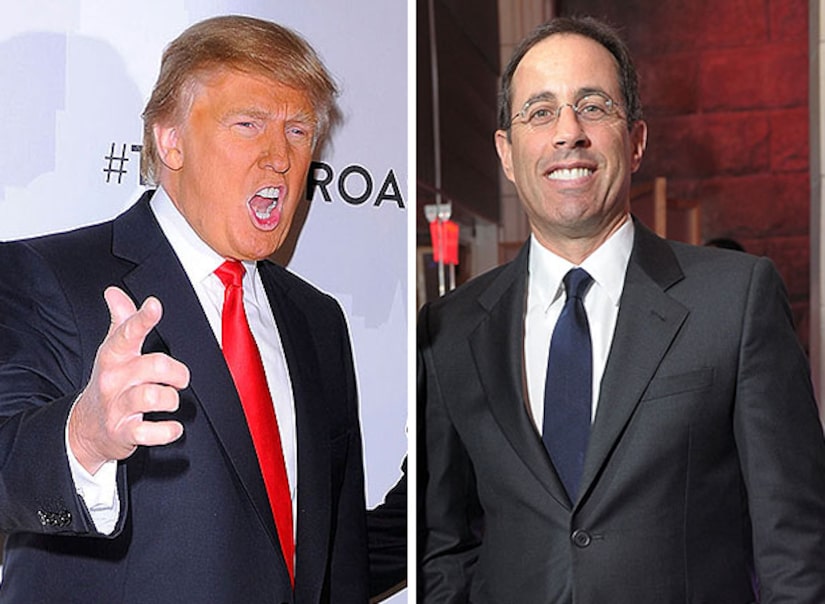 Trump is angry with Seinfeld for pulling out of his son Eric's charity event set for September 13 to benefit the Trump Foundation and St. Jude's Children's Research Hospital.

According to Jerry's rep, he decided to pull out of the benefit because he "has grown increasingly uncomfortable" with Trump's recent accusations and criticism of President Obama and "feels this kind of demagoguery has no place in public discourse." The comedian has instead opted to make a contribution to the Trump Foundation and St. Jude's Children's Research Hospital.

Trump, whose net worth is reportedly more than $7 billion, fired back in a letter which stated, "I just learned you canceled a show for my son's charity, because of the fact that I am being very aggressive with respect to President Obama, who is doing an absolutely terrible job as our leader."

As he does, Trump went on, "We don't care that you broke your commitment, even though the children of St. Jude are very disappointed, and despite the fact that your manager clearly stated you are 'truly a man of his word.'"

And on, and on... "What I do feel badly about is that I agreed to do, and did, your failed show, 'The Marriage Ref,' even though I thought it was absolutely terrible. Despite its poor ratings, I didn't cancel on you like you canceled on my son and St. Jude -- I only wish I did," Donald wrote, before closing the letter with, "You should be ashamed of yourself!"