After some speculation on the fate of "Mad Men," AMC and Lionsgate announced Thursday the hit series will return for seasons five and six, with "Men" creator Matthew Weiner signing a long-term deal, which could extend into a seventh season. 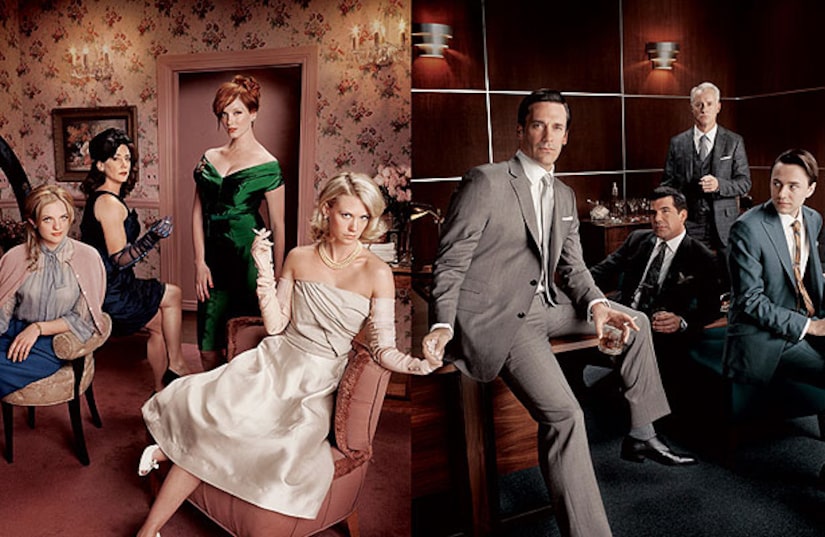 "I want to thank all of our wonderful fans for their support." said Weiner in a statement. "I also want to thank AMC and Lionsgate for agreeing to support the artistic freedom of myself, the cast and the crew so that we can continue to make the show exactly as we have from the beginning. I'm excited to get started on the next chapter of our story."

The Emmy-winning "Mad Men" debuted on AMC July 2007. Set in 1960s New York, the show follows the lives of the ruthlessly competitive men and women of Madison Avenue advertising and has an all-star cast including Jon Hamm, January Jones, Elisabeth Moss, Christina Hendricks and John Slattery.

UPDATE: A satisfied-sounding Weiner told Variety, "I feel so lucky that I get to do this, and that I get to finish the story. It's terrific to have security and not have to worry every year that I'm not going to have to go through negotiations again."

The negotiations Matthew is referring to involve his giant $30-million salary to be paid out over the next three years, and his control over the series as showrunner for the remaining seasons.

None of the cast members will be cut, and the length of the show has been finalized. Weiner will be allowed to make 47-minute cuts of the show, and aside from the season premiere and finale, 45-minute episodes will commence.

The acclaimed drama will most likely begin airing early next year.

"What you call love was invented by guys like me to sell nylons."Season 1, Episode 1: "Smoke Gets in Your Eyes"

"Look, I want to tell you something because you're very dear to me and I hope you understand it comes from the bottom of my damaged, damaged heart. You are the finest piece of ass I ever had and I don't care who knows it. I am so glad I got to roam those hillsides."Season 1, Episode 11: "Indian Summer"

"I'm Peggy Olson and I want to smoke some marijuana."Season 3, Episode 3: "My Old Kentucky Home".

"But that's life. One minute you're on top of the world, the next minute some secretary's running you over with a lawnmower."Season 3, Episode 3: "Guy Walks Into an Advertising Agency"

Doctor: So, Mr. Draper, you haven't had a physical in quite some time.
Don Draper: Yeah. I eat a lot of apples.Season 3, Episode 1: "For Those Who Think Young"

"I don't care what your politics are, this is America. You don't just shoot the President."Season 3, Episode 12: "The Grown Ups"

Trudy: Have you been drinking?
Pete: The whole country is drinking!Season 3, Episode 12: "The Grown Ups"

Betty: What's your name?
Don: Donald Draper. But it used to be Dick Whitman.Season 3, Episode 12: "The Grown Ups"

"If you don't like what's being said, change the conversation."Season 3, Episode 2: "Love Among the Ruins"

"Am I to entertain your ballad of dissatisfaction, or has something actually happened? Because I am at work, dear."Season 3, Episode 10: "The Color Blue"

"They say as soon you have to cut down on your drinking, you have a drinking problem."Season 4, Episode 8: "The Summer Man"

Lane: Three whiskey sours ought to do.
Robert Pryce: She's asking what you want, not how many you've had.Season 4, Episode 10: "Hands and Knees"

"You want some respect? Go out there and get it for yourself."Season 4, Episode 9: "The Beautiful Girls"

Don: It's your job. I give you money. You give me ideas.
Peggy: But you never thank me.
Don: That's what the money is for!Season 4, Episode 7: "The Suitcase"

Peggy: I have a boyfriend.
Joyce: He doesn't own your vagina.
Peggy: No, but he's renting it.Season 4, Episode 4: "The Rejected"

"You know what my father used to say? 'Being with a client is like being in a marriage. Sometimes you get into it for the wrong reasons, and eventually they hit you in the face.'"Season 1, Episode 10: "Long Weekend"

"Why it is that whenever a man takes you to lunch around here, you're the dessert?"Season 1, Episode 3: "Ladies Room"

"People were buying cigarettes before Freud was born."Season 1, Episode 1: "Smoke Gets in Your Eyes"

"Listen, Pete, I need you to go get a cardboard box. Put your things in it. Okay?"Season 1, Episode 4: "New Amsterdam"

"I'd have my secretary do it, but she's dead."Season 4, Episode 9 "The Beautiful Girls"

"I'm not a solution to your problem. I'm another problem."Season 4, Episode 11: "Chinese Wall"