Talk show host Ellen DeGeneres headed to Washington D.C. to host the TNT special "Christmas in Washington," and "Extra's" Mario Lopez got the inside scoop on what it was like performing for the First Family. 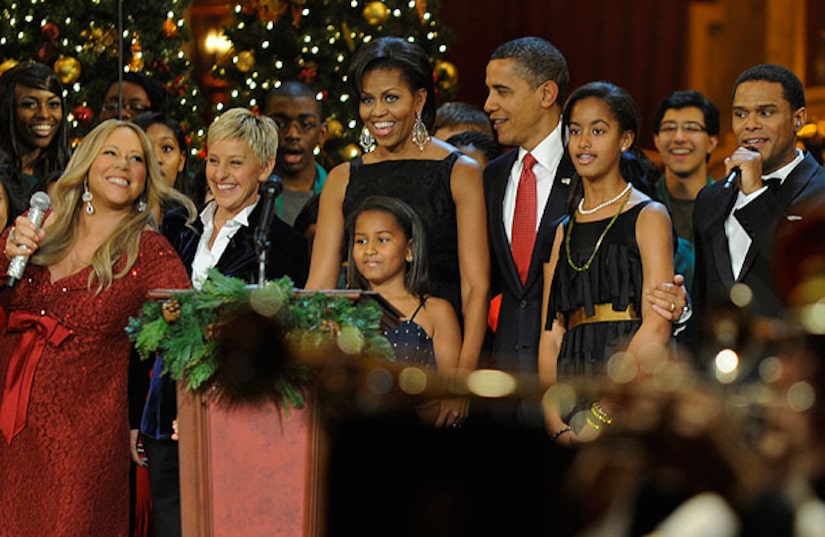 "It was amazing!" DeGeneres beamed, talking to Lopez on the set of "The Ellen DeGeneres Show," adding, "I've met the President and First Lady before, and they're lovely people, but it's a different thing to perform in front of them and a lot of senators and a lot of big fancy Washington folk."

Lopez also asked if there were any rules on what she could and could not say in front of the President. "No, I think they trust me that I'm not going to say anything disrespectful," the funnylady explained. "Right before the show started, I was talking to the President and Mrs. Obama and the kids were there, Malia and Sasha, and the President said to me, 'Try to be funny,' and I said, 'Oh thanks!'"

"We were singing 'Hark the Herald Angels Sing,'" DeGeneres said. "And at the end of the show, we were all standing up there, and the President and the First Family, and when it got to the 'a newborn king is born,' I kept trying to put my hand on Mariah's stomach and she kept knocking it away."

Ellen and company will make for a very Merry "Christmas in Washington," Friday, Dec. 17 at 8:00 pm on TNT.