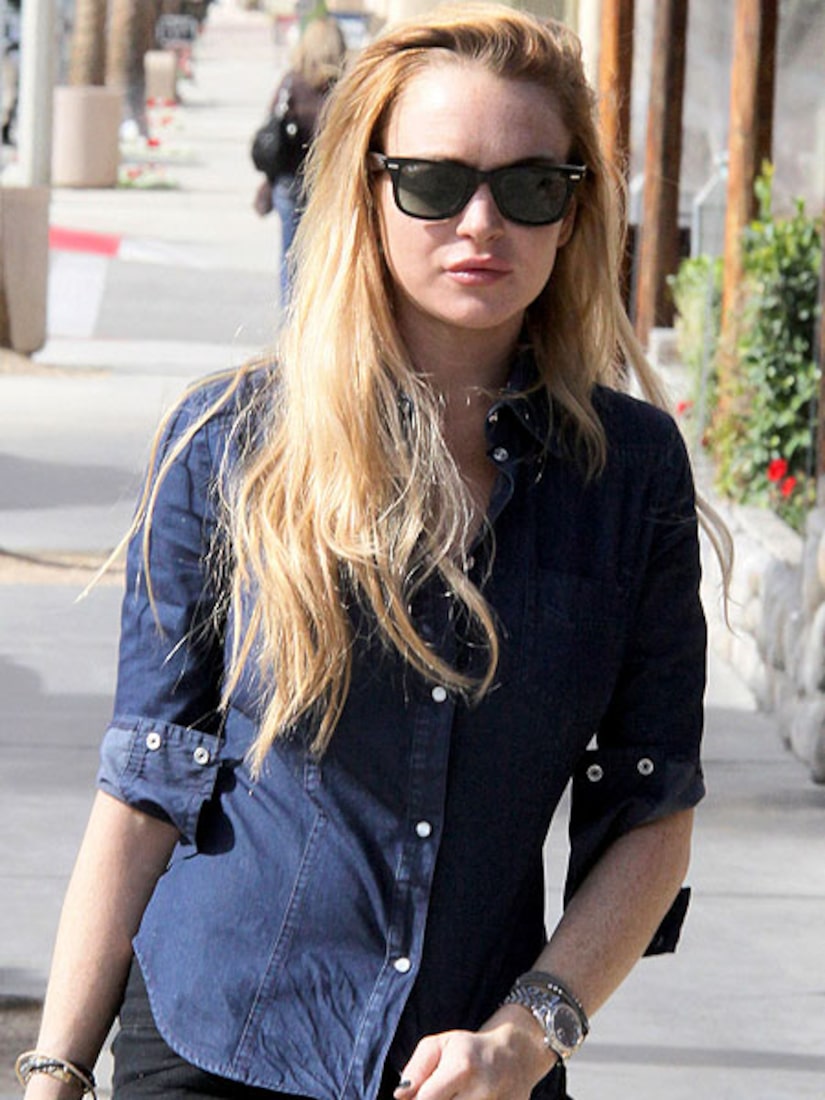 "We are withdrawing our offer from Lindsay Lohan," Wilder said. "We are currently in negotiations [with another actress] and working out the legalities of bringing her onboard."

That other actress is reportedly Malin Akerman, the attractive blonde from comedies "Couples Retreat" and "27 Dresses," but the official announcement has yet to be made.

At the Cannes Film Festival this year, Wilder was excited about having Lohan on board, but the actress' current personal woes reportedly caused both Lohan and the director to make the decision to move on.

"We have stuck by Lindsay very patiently for a long time with a lot of love and support," Wilder explained. "Ultimately, the impossibility of insuring her -- and some other issues -- has made it impossible for us to go forward."

The 24-year-old's rep told E! News, "Lindsay is dedicated to her recovery and together they decided to move forward without her."

Check 50 of the Greatest Teen Stars of All Time!

Broderick rose to fame with his charismatic lead in the 1986 hit, "Ferris Bueller's Day Off." He continued to demonstrate his versatility in "The Lion King," "The Cable Guy" and "The Stepford Wives," and in Broadway's hit, "The Producers."

Dunst's breakthrough role came in "Interview with the Vampire" (1994), in which she played a surrogate daughter vampire to Tom Cruise and Brad Pitt. Dunst then starred in the cheerleading sensation, "Bring It On," and the box office hit, "Spider-Man."

When she was 15, her debut album "Brandy" sold more than four million copies. In 1996, Brandy became the title character of the sitcom "Moesha." She appears on VH1's "Brandy and Ray J: A Family Business."

Cruise's breakthrough film came with 1983's "Risky Business." Within five years he had starred in some of the top-grossing films of the decade: "Top Gun," "Rain Man," and "Born on the Fourth of July." "Mission: Impossible IV" is slated for release on Memorial Day weekend 2011.

A former Mouseketeer, she signed with RCA Records in 1998 and landed three #1 singles on the Billboard Hot 100: "Genie in a Bottle," "What a Girl Wants" and "Come on Over Baby (All I Want Is You)." She continues to tour and stars in 2010's "Burlesque" with Cher.

Best known for his work on sitcoms "Happy Days," "Joanie Loves Chachi" and "Charles in Charge," in 2005 he appeared in episodes of "Arrested Development" and in 2009 hosted an episode of "Confessions of a Teen Idol."

By age 16, Shields was one of the most recognizable faces in the world due to her dual career as a fashion model and controversial child actress. She recently starred in "Lipstick Jungle" (2008-2009) and played Miley Cyrus's mom in "Hannah Montana."

Jason became a teen sensation with roles in "Silver Spoons," "It's Your Move," and "Valerie." He stars in 2010's "The Switch" with Jennifer Aniston.

Walker rose to fame with roles in "Highway to Heaven," "Who's the Boss" and "The Young and the Restless." Starting in 2001 he took on a leading role in "The Fast and the Furious" movie series as heartthrob daredevil, Brian O'Conner.

Dillon rose to fame in the 1980s playing troubled teen roles in "The Outsiders" and "Rebel." "Takers" will hits screens in 2010.

Cusack rose to fame in the mid-1980s with hit teen movies, "Sixteen Candles," "Better Off Dead" and "One Crazy Summer." He recently appeared in the 2010 comedy, "Hot Tub Time Machine."

Famous for her role as Joey Potter in "Dawson's Creek," her movie roles have ranged from thrillers like "Phone Booth" (2002) to box office hits like "Batman Begins" (2005). Oh, and she married Tom Cruise and gave birth to Suri.

Smith became TV's 'Fresh Prince' in the 1990's and his career has boomed ever since. He was nominated for four Golden Globe Awards, two Oscars, and has won four MTV movie awards. His recent hits include "Seven Pounds," "Hancock" and "I am Legend."

Her breakout role came in the box office hit "Legally Blonde" as bombshell lawyer, Elle Woods. Her recent films include, "Four Christmases" and "Monsters vs. Aliens" as the voice of Susan Murphy.

After his standout performance in "Stand by Me" (1986), Phoenix's picture was hanging in every teen girl's locker. He died of a drug overdose in 1993, age 23.

Shia LaBeouf blossomed from geek Louis Stevens in the Disney series "Even Stevens" into the star of "Transformers" and "Indiana Jones and the Kingdom of the Crystal Skull."

Campbell's star ascended in the 1990's TV series,"Party of Five." She has since starred in "Scream," "Blind Horizon" and "Partition," and is set for "Scream 4."

Her rise to fame came in Tim Burton's "Beetlejuice" in 1988. Ryder went on star in "Edward Scissorhands" with then-boyfriend Johnny Depp. In 2010 she'll star in "Cheaters."

DiCaprio rose to fame with performances in "This Boy's Life" and the box office megahit, "Titanic." Today Leo continues to star in hit movies — most recently "Shutter Island" and "Inception."

The "Donnie & Marie" TV series aired from 1976 to 1979 and again from 1998-2000. Donnie graced the cover of teen magazines more times than anyone can count. You can now find Donnie and Marie performing together in Las Vegas.

Hewitt's career began in the Disney Channel series "Kids Incorporated" and grew with roles in "Party of Five" and "I Know What You Did Last Summer." She starred in CBS's hit, "Ghost Whisperer."

Joey Lawrence was the "It" boy of the '90s. His role in"Blossom" launched a singing career, leading to two hit albums. With Joey's third-place finish on "Dancing with the Stars" he bounced back into the limelight and even hosted his own dance series, "Master of Dance."

This American boy band rose to fame in the late 1980s, selling 80 million records worldwide. Various members have pursued a solo career, but they reunited in 2008 for a tour.

In 1995 Silverstone became known as valley girl Cher from "Clueless." She is currently in the Broadway play "Time Stands Still," and a vegetarian activist and author.

Gellar rose to fame as the lead in TV's "Buffy the Vampire Slayer" for which she won 6 Teen Choice Awards. Gellar went on to star in "Cruel Intentions," "Scooby-Doo" and most recently, "Veronika Decided to Die."

"Growing Pains" landed Cameron on the covers of teen magazines like Tiger Beat and Bop. Now a Christian evangelist, he starred in the 2008 religious drama, "Fireproof."

Her childhood role in the sitcom, "Who's the Boss?" made her famous, and her eight-year stint as Phoebe on "Charmed" brought her a new round of fame. Milano's new series, "Romantically Challenged" premiered on ABC in 2010.

Duff's rise to fame came with her role in Disney Channel's "Lizzie McGuire" (2001-2004). She went on to star in "A Cinderella Story" alongside "One Tree Hill" hunk Chad Michael Murray. In 2009, she appeared in 6 episodes of "Gossip Girl" as Dan Humphrey's love interest.

*NYSYNC has sold more than 56 million records worldwide, going their separate ways in 2002. Justin Timberlake went on to superstardom, Lance Bass and Joey Fatone have appeared on "Dancing with the Stars," and Chris Kirkpatrick and J.C. Chasez have solo and acting careers.

With a film and TV career spanning from the 1970s to the present, Fox's starring roles include the "Back to the Future" trilogy, "Family Ties" and "Spin City." In 2009 he appeared in a prime-time special, "Michael J. Fox: Adventures of an Incurable Optimist (A Personal Journey of Hope)."

The Disney superstar, best known as "Hannah Montana," has wrapped up her final season of the Disney hit and intends to change her image from child star to "mature actress" with her new album, "Can't Be Tamed."

Their fame started at age one with their role as Michelle Tanner in "Full House." Mary-Kate and Ashley have starred in movies together ever since — "Passport to Paris," "Our Lips are Sealed" and "Holiday in the Sun." The Olsen Twins are have a fashion line, debuting in 2010 at New York Fashion Week.

Lohan made her motion picture debut in Disney's remake of "The Parent Trap" (1998). She catapulted to fame between 2003 and 2005 with leading roles in "Freaky Friday" and "Mean Girls," kept in the public eye through her driving mishaps and court cases.

The teen idol sold millions of albums and sparked a frenzy whenever he performed. His biggest hit was 1970's "I Think I Love You." At 21, he was the highest-paid solo performer. In 2009, he and brother Shaun teamed for TV's "Ruby & the Rockits."

Rob's breakthrough came in 1983 with his role as Sodapop in "The Outsiders." He later starred in "St. Elmo's Fire" and went on to become one of the more popular boys of the "brat pack." In 2009, Lowe had a supporting role in "The Invention of Lying" and a leading role in "Too Late to Say Goodbye."

Britney signed with Jive Records in 1997 and has sold over 85 million albums worldwide. She was the best selling artist of the 2000s and a prominent figure in mainstream popular music, aided by a much-publicized personal life.

Ringwald won over audiences with starring roles in "Sixteen Candles" (1984), "Breakfast Club" (1985) and "Pretty in Pink" (1986). She is currently starring in the ABC Family series "The Secret Life of the American Teenager."