The 2010 "Stand Up to Cancer" fundraising event, which aired live Friday across many networks, brought out all the Hollywood A-listers to talk about the disease and ways to raise awareness. 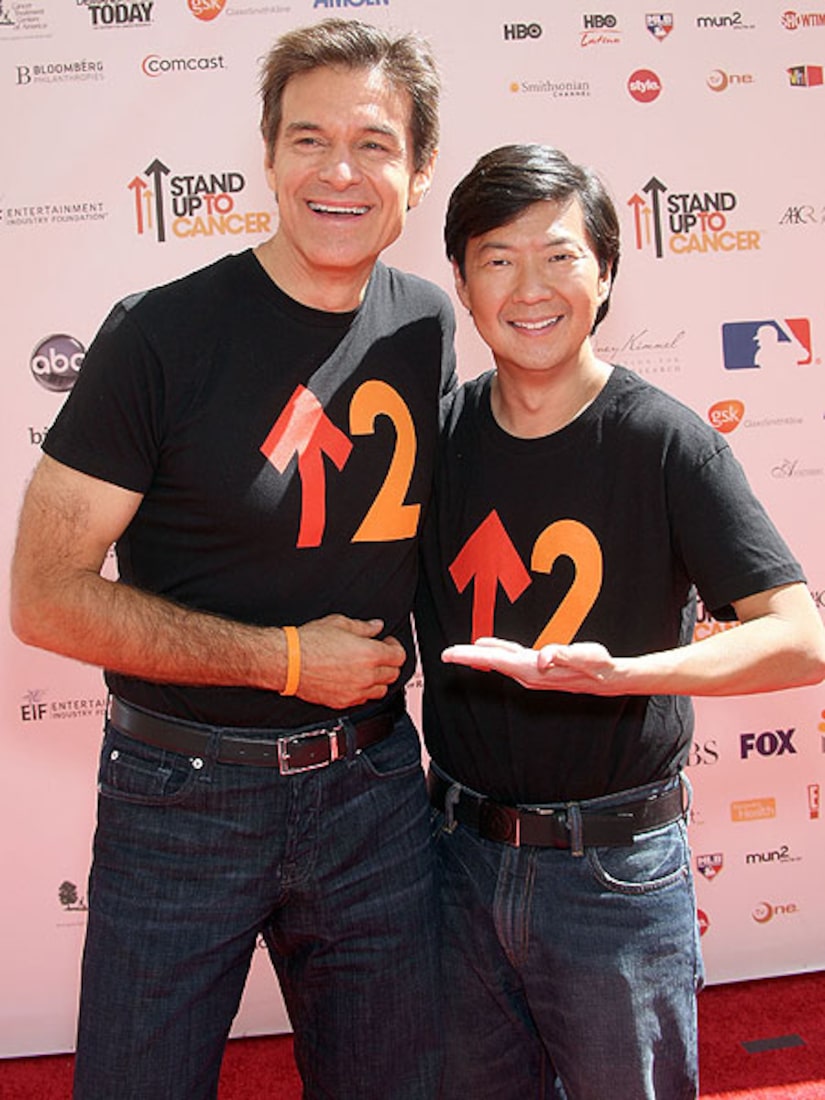 "Everyone's touched by this. Everyone has a story," said NBC news anchor Brian Williams, one of the telethon's three co-hosts. "Everyone watching tonight is missing someone, in a fight themselves, in remission, living with cancer. This is the common theme. So yes, we are going to go on the air in a recession and ask Americans to give money because this one is for the team. This affects all of us."

"Bones" star David Boreanaz hoped the effort to eradicate cancer will continue: "I think it's great everyone's here creating this awareness, but it should also happen tomorrow and the next day. It should be on a daily basis and not be taken for granted. So it's important to always donate, either through your pocket or your time. Love, friendship. We can make a difference today, we can make a difference tomorrow."

For many of the celebrities on hand, the cancer issue is very personal, especially "Community's" Ken Jeong, whose wife successfully battled breast cancer two years ago. "This is a culmination of events that have happened in my life -- from being a former physician, to being a comedian, to being a spouse of a cancer survivor. My world is converging on this very day, and it's one of the most special days of my life. And I really mean that."

Jeong said when his wife was first diagnosed, he was shooting "The Hangover" and found solace in not only the comedy but his co-workers as well. "Director Todd Phillips and Bradley Cooper helped me get through it. All my scenes were on Vegas, so they would make sure I would go home in between days of shooting. Bradley even drove me home one time, so yeah, they were incredibly supportive. It was hard but also cathartic. In a odd way, it helped me to not be afraid of anything."

"Extra" Lifechanger Dr. Drew Pinksy weighed in on how alienating the disease can be. "When I was a clinician, cancer was typically what I dealt with, still deal with it, as a matter of fact, and I have to tell you, it's a fairly lonely battle. Even if you are part of a team, you feel its a backstage experience, and you feel deeply alone. But to have the entire media universe turn out to talk about this changes the game."

And on the examples young Hollywood might be setting about leading a healthy lifestyle, Dr. Drew explained, "You are more likely to die of an addiction than cancer. That's the reality. So for us who look at the behavior of young Hollywood in sort of judgment and disdain, it's not a very healthy position for us to take. These are people in trouble. Yeah, they are not setting a great example, but let's urge them to get the care they need and hope the best for them, and then work on our own gardens. Teach our families, support organizations like this, focus on your own kids."

See photos of all the stars at the 2010 "Stand Up to Cancer" telethon.

Michael Douglas' current battle with throat cancer had many of the stars offering their most heartfelt prayers and wishes for his speedy recovery. Dr. Mehmet Oz believed Douglas had a better than good chance to beat it because of Douglas' upbeat attitude.

"The most important thing you have to recognize is that cancer therapy isn't a wind sprint, it's a marathon. And keeping an upbeat attitude, especially through the first part, helps prepare for more ahead. If we rid ourselves of all the cancer in the world, how much longer do you think we'd all live? Only 2.8 more years. What kills Americans is we are not strong enough to withstand the cancer we get. But if you stay upbeat and strong, if you keep moving, you have a good chance of overcoming it."

If you missed the televised live event Friday, you can watch it here at ABC.com.

For donations and ways you can help, visit StandUp2Cancer.org.