The "American Idol" Top 10 contestants aren't sweating the competition... too much, but they are excited about going on tour together this summer. 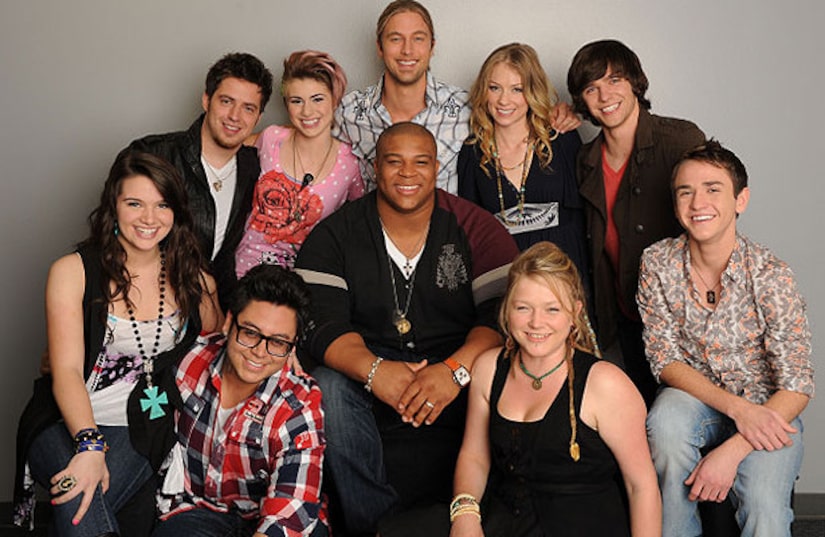 At an exclusive photo shoot promoting the "American Idol" top 10 tour with the talented singers, "Extra" talked with the gang about receiving criticism from the judges, and about their favorite guest mentors, plus singing Beatles songs in this week's theme.

"I'm really excited about this week," Casey James admitted. "This one's going stand out for me. I'm just going a different way with it."

Siobhan Magnus said she's "kind of drawing from my experience in musical theatre. It's gonna be very different from what I have been doing. It's gonna be really nice and kind of refreshing for me."

As to their favorite mentors, there's no doubt who Aaron Kelly loved -- his crush, Miley Cyrus. "She is such a sweetheart, down to earth," Kelly swooned. "When I met her, I did not expect her to be that sweet, just because she's so big and famous. She definitely has not let fame change her."

Frontrunner Crystal Bowersox says "It's fun to have people who are of that magnitude and on that level in the business to come in and give us little pointers. It's all good advice."

Bowersox doesn't sweat the "frontrunner" label, either. "I said it before; there is no clear defined frontrunner. This is a show where anything can happen. People vote for their favorite and that's how it works. I'm just taking it in stride and I'm having a good time, having access to incredible, talented people. It's a good thing."

Do the judges' critiques bother them at all? Andrew Garcia admits, "In the beginning they were pretty rough on me. I was putting too much thought in it. They are harsh, but they let me know what's up. I'm thankful for that."

As for Garcia's mother giving grief to Simon Cowell, Garcia replied, "Sometimes she's been getting crazy. I'm like, 'Mama, calm down. Don't be getting crazy up there.' But that's my mama. She's always got my back."

For all the pressure, Michael Lynche says his family helps him maintain his sanity. "You don't want to get too crazy with a big head or lose confidence. It's already hard enough on you. I've got my family, they keep me grounded."