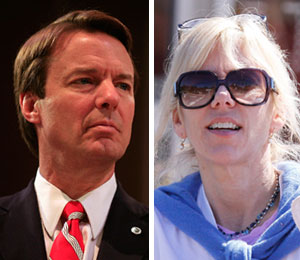 The long, very public fall from grace for former Senator John Edwards appears to have no end in sight.

Now, according to court documents obtained by AP on Friday, Edwards' baby mama, Rielle Hunter, has been granted a temporary restraining order against former Edwards aide Andrew Young, seeking the return of a "very private and personal" tape, which could fetch a tidy sum from the tabloids.

Hunter's affidavit said, in part, "In or about September 2006, using my video camera, I authored a personal video recording that depicted matters of a very private and personal nature. In 2006, I was also having an intimate relationship with Edwards."

In his newly released book, "The Politician," Young says he saw a tape that showed Edwards and a visibly-pregnant woman, presumed to be Hunter, engaged in a sex act. Young says he found the tape, destroyed and in the trash, but he was able to repair it.

Court documents also reveal that deputies went to Young's home to retrieve tapes and photos, but Young's attorney said that the tape was not available.

Hunter has also filed suit against Young and his wife, seeking damages for invasion of privacy.

Just this week, Elizabeth Edwards announced that she and John were finally separating. Edwards recently acknowledged that he was the father of Hunter's 2-year-old daughter, Frances Quinn.