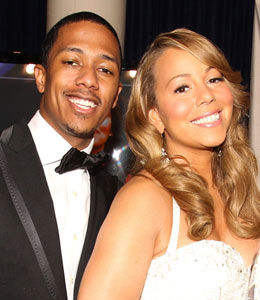 Happy couple Mariah Carey and Nick Cannon are ready for a baby, and they're getting all their rubber duckies in a row.

"We absolutely plan to have a family," Cannon tells MTV News. "But we gotta prioritize, because that's a major, major priority. That's like the only priority in life." he adds.

See photos of Mariah from over the years

Cannon continued, "We wanna make sure everything is out of the way and that we don't have any distractions."

Nick and Mariah haven't slowed down since tying the knot in April 2008. He's Chairman of TeenNick and hosts "America's Got Talent," while she's on tour with a remix album due later this year.

"But we're definitely moving toward having children. We got our house in L.A., and we got a house in New York... close to schools," Cannon dished. "So we take all of that stuff into consideration."

The Palin Family Brawl in Alaska: Listen to Bristol Describe Her… 9