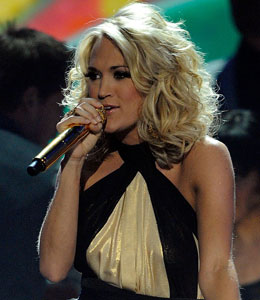 The Super Bowl is going a little bit country!

Country star Carrie Underwood will perform the National Anthem at Super Bowl XLIV next month. Underwood will also take the stage at this weekend's Grammy Awards, where she is nominated for two.

See photos of Carrie and other Grammy Award nominees

The Indianapolis Colts will take on the New Orleans Saints on Feb. 7 in South Florida.

Queen Latifah will also perform "America the Beautiful" before the game, with The Who scheduled for the half-time show.