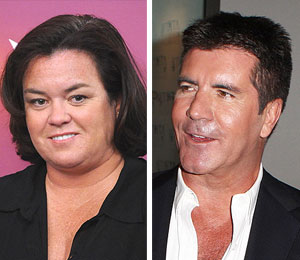 Rosie O'Donnell is a huge fan of Simon Cowell, but is she thinking of taking over his duties on "American Idol"?

O'Donnell, 47, sat down with "Extra" to discuss rumors she may be tapped to fill Cowell's empty judging seat on "Idol" next season.

"I read that too, but I don't think it's true," Rosie says of the rumor. "He's irreplaceable."

Simon announced that he would be leaving the singing show to produce a US version of "The X Factor" -- a venture that has piqued Rosie's interest.

"I just have a lot of respect for that guy," O'Donnell says when asked if she'd consider sitting beside Simon on "The X Factor." She adds, "If he wants me to do 'The X Factor,' I'm in."

Rosie recently filmed an HBO documentary, "A Family is a Family: A Rosie O'Donnell Celebration," which challenges stereotypes of what makes a family -- and highlights stories of same-sex parents, mixed-heritage families, single parents and families who adopt.

"A family is forever and it's people who teach you to love all the way," Rosie says. "And when you love people you want them to be happy and you want the best for them."

Rosie -- who calls her split from ex-wife Kelli Carpenter "the most difficult thing of my adult life" -- has found love again with new girlfriend Tracy Kachtick-Anders.

O'Donnell says that she and Kelli's children have taken their separation "pretty good," and that her family meshes well with Tracy and her six children.

"A Family is a Family: A Rosie O'Donnell Celebration" premieres Sunday, January 31 on HBO.