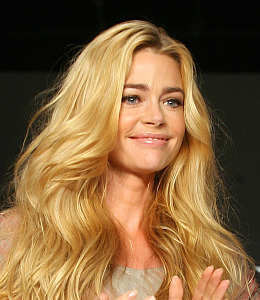 Denise Richards admits she was "sad" to learn of ex-husband Charlie Sheen's arrest in Aspen on Christmas Day, following a domestic dispute with his wife, Brooke Mueller.

"She was going to be, and is, my daughter's stepmom," Richards says of Mueller on "The Oprah Winfrey Show," adding, "So I want that to be a healthy marriage. That helps everyone."

"It's sad," Richards adds of Charlie and Brooke's marital issues. "Perhaps people can understand what I went through."

Denise and Charlie's split is regarded as one of Hollywood's nastiest; the actress filed for divorce in 2005, claiming Sheen had an abusive and threatening disposition. "There was a lot of verbal abuse," Denise says. "He never hit me; it was a lot of verbal. Arguments got heated. That scared me." The actor denies Richards' abuse claims.

The former couple has patched things up since their split -- and Denise says she trusts her ex with their two daughters Sam, 5, and Lola, 4. "All of this has been a work in progress, and it's up and down." She adds, "Charlie and I are in a great place now."

In fact, the exes are so comfortable that Denise is the person Charlie phoned after being arrested on suspicion of menacing, second-degree assault and criminal mischief. "I thought it was odd that he was calling collect, and he said: 'Yeah, they won't let me use my cell phone here. I'm in jail,'" Richards says. "He told me that he and Brooke had gotten into a fight and she called the cops."

Sheen was prevented from seeing Mueller over the holidays, so he spent New Year's with Denise and their girls.

Since last week, Mueller was treated for an infection, possibly pneumonia, in a Los Angeles hospital, which caused a postponement of a Colorado court date on the matter of the December 25th events. Brooke was released from the hospital this morning.